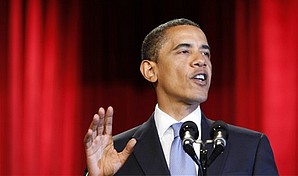 Perhaps Settlement Council leader Danny Dayan said it best; the address heard a short time ago from Cairo by US President Barak Hussein Obama was “more Hussein than Obama”.

Dayan warned that we may not permit the American president dictate housing and other decision for Israel, for if we do, these dictates will expand to Jerusalem and Har HaBayis.

There is no doubt that the American president scored big points with the Muslim world, working in earnest to legitimize the Islamic community in the eyes of westerners still licking the wounds of 9/11. Obama made a point of mentioning the “Palestinian people” and the “holy Koran” numerous times, making his administration’s position vis-à-vis the global Islamic community and a Palestinian state in Eretz Yisrael extremely clear.

For those who remember arch terrorist Yasser Arafat, who brought airplane high-jacking and Islamic terror to the 20th century, he would have been proud and possibly amazed to hear the president of the United States come out as strongly and with such determination for the Palestinian cause.

Obama was perhaps a bit ambiguous regarding yishuvim, while stating they “undermine peace efforts”, he called to “stop the settlements” but not for their “removal”.

The mainstream left-wing Israeli media is expressing satisfaction from the address, adding there ere no elements of surprise but does point out Obama is extremely determined to forge ahead with the so-called two-state solution towards the establishment of Palestine.

Iranian President Mahmoud Ahmadinejad can breathe a deep sigh of relief, as the US president made it very clear, he is pushing dialogue and there is no military option currently on the table.

Conspicuously absent perhaps were flags. Aside the American flag was the Egyptian flag, and none other, despite the address being billed as one for the entire Muslim and Arab community. It appears Egyptian President Hosni Mubarak is not willing to share the spotlight, enjoying his new role as the rising star American ally in the Mideast.

Prime Minister Binyamin Netanyahu will be meeting later in the afternoon with senior officials after which a formal response to the address is expected.