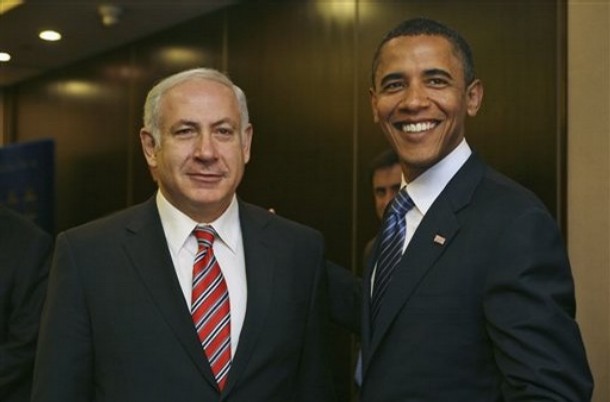 It appears US President Barak Obama is determined to show the world his intense efforts, including unrelenting pressure on Israel, is yielding progress as Prime Minister Binyamin Netanyahu and PA Chairman Mahmoud Abbas (Abu Mazen) will meet with him in NYC on Tuesday, ahead of the UN General Assembly.

Prime Minister Binyamin Netanyahu met in Jerusalem three times last week with US special Mideast envoy George Mitchell, including two meetings on Friday, one in the morning and the second following Mitchell’s return from Ramallah, where he met briefly with Abu Mazen.

In Jerusalem, the meeting is hailed a victory for Mr. Netanyahu, who explains he has not changed his position, only willing to accept a partial construction freeze, which will not include Jerusalem. Officials in Jerusalem explain that Abu Mazen on the other hand has agreed to meet, albeit hesitantly, despite its demand that Israel accepts a total construction freeze as is demanded by the White House.

The American president is expected to meet with both leaders individually, followed by the trilateral forum. Most feel the meeting, which his being called a “summit” is really little more than show, but Obama is determined to show progress in the Mideast and this little show will permit him to do just that, ahead of the General Assembly, which convenes later in the week.

Mr. Netanyahu was scheduled to leave Israel on Wednesday, but has moved up his departure to accommodate the American invitation to meet in New York City on Tuesday.

If the meeting does take place, it will mark the first meeting between Netanyahu and Abu Mazen since the prime minister took office a number of months ago.

Supporters of the prime minister explain Mr. Netanyahu is attending the meeting from a position of strength, having rejected demands for a total and unconditional construction freeze, adding his predecessor, Prime Minister Ehud Olmert, attended such a summit with maps and other planned concessions in hand, which is not the case today.