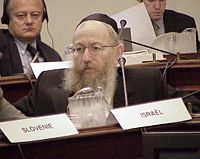 There has been much discussion and dispute in the shomer shabbos community surrounding the new law determining brain death as legitimate under certain well-defined conditions for the sake of organ donations.

Maran HaGaon HaRav Shmuel Halevy Wosner Shlita is one of the gedolei torah who came out against the Chief Rabbinate’s attempt to relax the definition of death towards facilitating organ donations (see YWN story HERE) and now, Deputy Health Minister R’ Yitzchak Litzman has come out in no uncertain terms opposed to linking death to brain activity. Litzman stated gedolei torah have not changed their determination and death must be determined only by the cessation of one’s heartbeat.

Rishon L’Tzion Rabbi Sholom Amar Shlita has also come out and explained the Chief Rabbinate’s ruling is not a determination for organ transplants, and in the case of harvesting an organ, a rabbi must be consulted, each case on its own merit, stating the ruling should not be viewed as an effort to simplify determining time of death.

Litzman’s statement is unwelcome in the medical community, since when one’s heart stops working, the time available to harvest organs is extremely limited according to medical experts.

Litzman’s position caused a stir at a recent medical community gathering discussing transplants, adding if the brain death determination is contrary to the hashkafa of the patient, the plug may not be pulled and nothing may be done to curtail his life. Death must be determined by the cessation of the patient’s heartbeat.

MK (Kadima) Otniel Schneller, a shomer shabbat MK who authored the Brain Death Law, called on Litzman to abide by the law of step down from his post. Schneller insists that Litzman’s opinion can be nothing more than his personal view since the law now sets brain death [within the defined parameters] as the determination of death.

Prof Avinoam Reches, who heads the Israel Medical Association Ethic Committee called Litzman’s statement “absurd”, questing how a member of the cabinet can openly oppose the law and seek to make his position state policy.

Health Ministry officials released a statement stressing the deputy minister does indeed respect the law, but he wishes to direct one’s attention to the clause in the law that demands complying with the sensitivities of the patient and the family in cases in which they demand death is only determined by a cessation of cardiac activity, not brain activity.