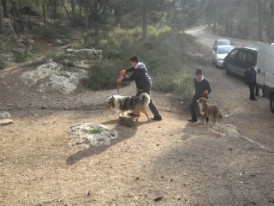 Talmidei yeshiva affiliated with Netivei Noam will be working in concert with Zaka search & rescue officials, training as the new handlers of dogs that will assist in such life-saving efforts. The announced move brings an end to another stereotype, that dogs and chareidim are not synonymous. It appears when the issue at hand is pikuach nefesh; anything towards achieving the goal is acceptable.

A modest ceremony launching the new unit was held in Yerushalayim on Sunday attended by Zaka officials, roshei yeshiva and of course, the young volunteers and their hounds.

The yeshiva was established by Rabbi Chaim Perkal in response to concerns for youths who simply did not fit the stereotype beis medrash setting, seeking to provide them a framework that would prevent them from ‘hitting the streets’. Baruch Hashem, he succeeded in a big way. The talmidim are engaged in torah study during the morning hours, and the remainder of the day is dedicated to teaching them a profession. Those students involved in the dog handler program have been trained by the IDF’s Homefront Command, and they have be taught how to handle their pets and to engage in search and rescue efforts, including on rough terrain.

During the ceremony, the young volunteers exhibited their newly-acquired skills as dog handlers.