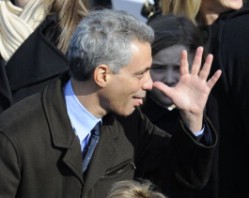 Galei Tzahal (Army Radio) reports that White House Chief of Staff Rahm Emanuel has warned that if progress is not made in diplomatic efforts between Israel and the PA (Palestinian Authority), the White House will adopt a less active role in the regional peace-making efforts.

According to the report, the White House is nearing its limits with the checkmate situation existing between Jerusalem and Ramallah. The report is based on remarks made by the senior White House official to Israel’s consul-general in Los Angeles, Jacob Dayan.

According to the information passed to the Foreign Ministry in Israel by Dayan, Israel is blamed for only adopting White House policy after months, usually too late while the PA never misses an opportunity [to sabotage diplomatic efforts] as well.

One can only question if the White House threat is perceived as that, or perhaps a blessing in disguise.