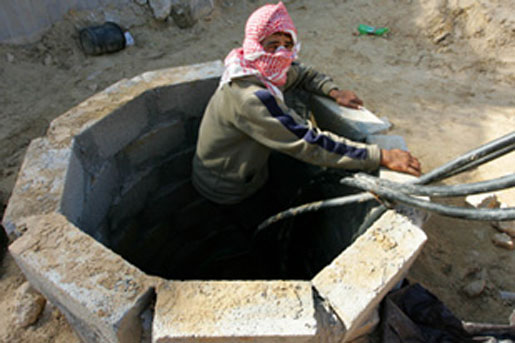 In another amazing feat by Yad L’Achim, an organization whose volunteers continue to display mesirus nefesh on behalf of Am Yisrael, a Jewish woman was smuggled from Egypt to Hamas-controlled Gaza on Tuesday afternoon via a smuggling tunnel from Rafiach, with the rescuer and victim making their way to Erez Crossing, into the hands of Israeli authorities.

The woman was taken to a police facility, questioned at length, and then released to Yad L’Achim custody, and is holed up in a hidden location.

According to a Ladaat.net report, breaking the story, the story is a familiar one, about a Jewish woman who married an Arab, living in Egypt. Her life was one of abuse until she could no longer endure; contacting her sister in Israel, who in turn contacted Yad L’Achim.

Yad L’Achim officials, who are no strangers to dangerous missions, realized the unique complexities of this case, entering Egypt and then Gaza, and hired the services of ‘specialists’ for this mission. The remaining details remain classified for the protection of all involved as well as future rescue missions.

UPDATED INFORMATION: During her marriage to the Arab man, the Israeli woman, 27, who comes from Ashdod, gave birth to four children, the youngest being about a year old. In the rescue operation, the children were smuggled out of Egypt with their mother and they are all in a Yad L’Achim safe house, in the first stages of building their new Jewish lives.

In a dramatic detail of the rescue, the woman left with her children when her husband left the home, taking a taxi to a destination to begin her escape. Her husband phoned her in the cab and threatened to kill her if she leaves, but Baruch Hashem, she remained strong and today, is somewhere in Israel in the safe hands of Yad L’Achim officials.

She was taken to Sderot police for questioning after crossing the border but police agreed to wait until today, Wednesday, to speak to her due to the condition of one of her children.