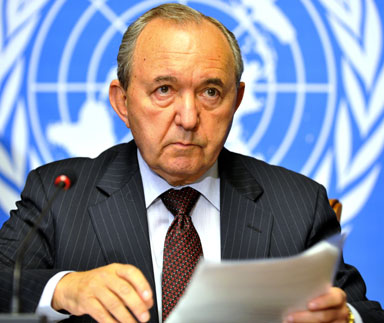 For those who insist the Goldstone Report on Operation Cast Lead is an objective report card of Israel’s actions, it has been learned the honorable judge, Richard Goldstone, has ties with a number of organizations known for their anti-Israeli publications.

Yisrael HaYom reports it has been learned that six months before the UN tapped him to head the investigation into the Israeli offensive; he signed a document decrying the Israeli atrocities in Gaza. The report called to investigate the assault against civilians on both sides. Goldstone’s true feelings are evident in a report released by the Im Tirtzu (If You Will It) Organization.

YWN-Israel found Goldstone linked to a number of anti-Israeli organizations, including Physicians for Human Rights organization, once again, he is a member of the board of directors (http://physiciansforhumanrights.org/about/board_bios/richard-goldstone.html). This organization does not require an introduction, on the forefront of anti-Israel accusations long before Cast Lead, always portraying Israel as the cause of Arab pain and suffering.

NGO Monitor (http://www.ngo-monitor.org/index.php) has also kept a watchful eye on Goldstone, reporting he is affiliated with Amnesty International. Goldstone’s other NGO links include serving as the chair of the Executive Committee of the Institute for Historical Justice and Reconciliation (IHJR) and Center for Economic and Social Rights (CESR), and advisory boards of Institute for International Criminal Investigations (IICI) and Brandeis University’s International Center for Ethics, Justice, and Public Life.

**Goldstone is the chair of the Executive Committee of the Institute for Historical Justice and Reconciliation (IHJR).

**IHRJ’s Middle East Project to “establish a ‘shared history’ that will acknowledge a set of accepted historical facts” is being conducted in partnership with a Palestinian NGO, the Arab Thought Forum (ATF).

**The ATF’s narrative consists of demonizing language: “The Palestinian Holocaust is unsurpassed in history…the ugliest crime of modern times.”

“Judge Goldstone’s role in this process, as with his connections to Human Rights Watch and Amnesty International, reinforces the criticism of his report on the Gaza conflict”, NGO Monitor concludes.

It would appear from the information gathered regarding Justice Goldstone’s impartiality, from a UN Human Rights organization perspective, they definitely appointed the right man for the job, apparently setting out on his fact-finding mission of mercy armed with his anti-Israel ideology.

Adding to the Goldstone chutzpah was his daughter Nicole, who spoke of her dad’s pain in September ’09 (http://www.theyeshivaworld.com/article.php?s=goldstone%27s+daughter). She spoke of her father’s love for his People and Israel, and how he did everything possible to present a report as favorable for Israel as possible.

It would appear that the Goldstone Report was already written in Goldstone’s mind before he and his team landed in Gaza. The true fact-finding report, the one ordered by IDF Judge Advocate General Brig.-Gen. Avichai Mandelblitt (http://www.theyeshivaworld.com/article.php?p=46591), shows without a doubt that the honorable human rights watchdog is nothing but another anti-Israel activist with a suit and tie.