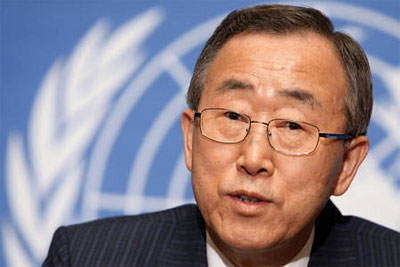 By now, it should be clear to Israeli leaders that no matter how much flexibility they exhibit in efforts to elicit the approval and support of the international community, Israel must place its faith regarding Yerushalayim [and the remainder of the country] in HaKadosh Baruch Hu, and this is once again abundantly clear by the statements heard around the world over the past day. Yes, we must do due diligence and we may not sit idly back and rely on miracles, but we must also openly declare out G-d given right to Yerushalayim and all of Eretz Yisrael, and  not hide behind excuses of security, demographics and other non-relevant realities.

United Nations Secretary-General Ban ki-Moon has joined in with the White House and the PA (Palestinian Authority), providing us with his view regarding planned construction of additional housing units in Ramat Shlomo. He explained “settlements are illegal under international law”.

It appears that the international community has indeed adopted the mantra of Israel’ radical left-wing and any areas of the country that it chooses not to recognize are labeled a “settlement”. On that same note, any area of Yerushalayim that it wishes not to place under Israeli sovereignty is referred to as “occupied East Jerusalem”, preferring to ignore the Jordanian occupation of areas from 1948-1967, and label Israel the “occupier”, not Jordan.

In fact, one cannot really blame the goyim, since the labels affixed to these areas are the result of tenacious efforts of Peace Now and its supporters in Israel and today, around the world. It is the likes of [former Meretz Party Minister of Education] Yossi Sarid who amend school text books to teach our young that Israel ousted Arabs from their homes and they are simply trying to exercise their right under international law, the so-called ‘right of return’.

As top man in the UN, Moon is actually filling his role in true fashion, opting to accept the anti-Israel position when one is available.

Today, 17 years after signing the Oslo Agreement on the White House lawn, the true intentions of the PA (Palestinian Authority) should be clear to all, the removal of the State of Israel which will be replaced by the State of Palestine. To date, Israeli leaders continue to seek approval from the White House, ignoring HaKadosh Baruch Hu, tragically missing the lessons when the opportunity arises for Kiddush Hashem, too often opting for the opposite.

Once again, it is clear that the White House, UN, European Union and Israeli left will remain opponents regarding an “undivided Jewish Jerusalem”, not to mention Yehuda, Shomron, Jordan Valley, Golan Height and other areas, and it is equally clear that yet another prime minister believes he can use his political and oratory skills to sidestep reality, buying time, seeking to complete his tenure in office by remaining overly ambiguous on key issues.

The Gentiles will compel Israel to make the choice, one that should have been announced decades ago, following the miracles’ of the June 1967 Six Day War, yet leader after leader, from the so-called right-wing and left-wing continue to ignore the writing on the wall, that the redemption will neither stem from the White House or UN Headquarters on NYC’s 42nd Street.