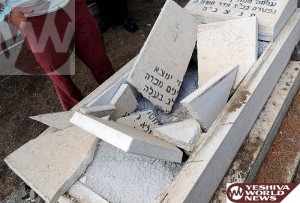 [PHOTO LINK BELOW] Following last week’s attack in a cemetery in the Jezreel Valley, Chief Rabbis Yonah Metzger Shlita and Shlomo Amar Shlita visited Kibbutz Merchavia to get a first-hand look at the damage. Most of the tombstones were damaged or destroyed. Damage was extensive.

Rabbi Metzger stated he cannot believe that Jews would be behind such an attack, adding that when a mosque in the Shechem area was vandalized he condemned the act, now waiting to hear similar condemnatory statements from Islamic clerics. He also called on all organizations that are defending the bones in Ashkelon, referring to the Barzilai Hospital controversy, to come and defend the graves in Kibbutz Merchavia. He questioned why they are not responding to this vicious attack.

R’ Amar explained that in a recent visit to Morocco, he saw how the Muslims care for cemeteries and the graves, stating “the midos of the goyim in Eretz Yisrael have deteriorated and it is most unfortunate that they do not learn from Morocco”. Rav Amar recited tefillos and asked for forgiveness from the niftarim.

Also taking part in the visit was MK (Ichud HaLeumi) Dr. Michael Ben-Ari, who called on law enforcement officials to find those responsible and bring the full weight of the law down on them. “In Europe it began the same way, with attacks against cemeteries” added Ben-Ari. He also called on kibbutz officials to hire Jews only to repair the damage, explaining it would be unacceptable to give money to people who may be in some way linked to the attackers, thereby permitting them to profit from their despicable actions.

YWN PHOTO LINK: Click HERE to see the damage at the cemetery.