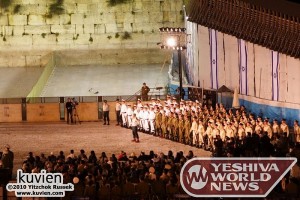 Today, Monday, Memorial Day in Israel, provides a break from the mundane, the common disputes and political discussions that seem to divide the nation – today is a day of remembering, reflecting and for many, one of pain and difficult memories.

This Memorial Day in Eretz Yisrael, the 22,682 members of the IDF and other security agencies who fell in the line of duty along with the thousands of victims of Arab terrorism are remembered. It is a solemn day that crosses the political and religious divide, providing a clear realization that the pain of loss does not discriminate, striking the homes of all Israelis, religious, secular, chareidi, and dati leumi, as well as the homes of the members of the Druse and Bedouin communities, whose members serve in the IDF and other security forces as well.

Ironically, as is witnessed following terror attacks r”l, pain has a piercing and uniting impact on the nation, compelling us all to push our differences aside for a brief moment, replacing differences and disdain for a modicum of understanding and empathy. Judgmental and confrontational statements are replaced by heart-warming actions and embracing gestures.

Anyone visiting a cemetery in Israel today will find mourners, family members reuniting with their loved ones as it were, reaching out to remember and reflect back prior to the event that snuffed a loved one from their midst, whether on the battlefield or simply on a bus heading to school and work, the achdus is palpable, the feeling of being one nation is evident.

One such example would be Bnei Brak, where a memorial was held on Sunday  night in the presence of community residents and rabbonim, paying tribute to the fallen, those who made the ultimate sacrifice for Am Yisrael and Eretz Yisrael. [YWN PHOTO LINK: See photos HERE]

The willingness to empathize with the mourners supersedes the need to explain one’s objections to the flag or the secularist nature of the modern state. As was the lesson of last week’s Holocaust Remembrance Day, those who seek to destroy Am Yisrael, past and present, are simply uninterested in one’s religious and political affiliation, simply willing to make do with killing anyone labeling his/herself a Jew. Today, in Israel, we are aware of this message, one that has resonated throughout the generations, one that is painfully present today with the likes of Iranian President Mahmoud Ahmadinejad and his allies.

When the memorial siren sounded on Sunday night, Kol Chai Radio called on the tzibur to “avoid chilul Hashem” above all, pleading with those who simply cannot stand idle for one minute to make certain they are indoors, out of the public eye, rather than stirring the fuel of dispute and arouse pain in those who yet do not understand the Torah way. “Stand still and recite tehillim” was the message from Kol Chai, as the broadcast shifted to the recitation of tehillim with the audible siren wailing in the background. Take that little step towards uniting with those who are not in the fold, rather than using the opportunity to widen the chasm that separates us in our day-to-day lives was the radio message. Perhaps this is the message of the day, for achdus and reliance on HaKadosh Baruch Hu will result in a new reality, and those seeking to destroy us will be facing an enemy that is simply undefeatable.

Following is a link to photos of the Sunday night memorial ceremony, the official state ceremony held at the Kosel, in the presence of President Shimon Peres, Kosel Rav Rabbi Shmuel Rabinowitz, IDF Chief of Staff Lt.-General Gabi Ashkenazi, Jerusalem Mayor Nir Barkat and others.