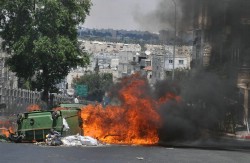 With Atra Kadisha and the Eida Chareidit vowing to hold a major protest against plans to move graves to permit construction of a new fortified wing of Barzilai Hospital in Ashkelon, it appears Ashdod City Hall is planning to construct a stadium to accommodate 20,000 visitors in the Rova Aleph neighborhood, near a chareidi population. Such a project would result in shabbos sporting events, a most unwelcome reality for the community’s chareidi residents.

In a surprise move that has angered many, Ashdod Councilman R’ Amram Knafo voted in favor of the project while Yahadut HaTorah councilmen abstained.

Not wasting any time, Eida officials have stated they will not sit idly by as the plan advances towards increased chilul shabbos in the city. Eida officials expressed surprise over Knafo’s support.

It is not unlikely that a major protest against the construction of a stadium will be held by the Eida in the not-too-distant future.