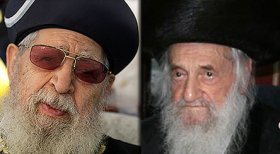 The visit, which lasted approximately 30 minutes, took place after many years of the two Poskei Hador not having the chance to meet with each other.

The conversation of the meeting involved the recent controversial issue of the IDF conversion, and the two senior Poskim spent the meeting discussing the Halachos of Geiyrus.

Following a Psak Halacha by Chacham Ovadia approving 4,500 conversions conducted by the IDF, leading Gedolim – including the Eida Chareidis – came out in strong opposition. A letter of Gedolim had signed a letter of protest against the Psak halacha (although refrained from mentioning Chacham Ovadia’s name). It escalated to the point that today (Wednesday) had originally been scheduled as a day of protest, and a massive Hafgana had been planned. Those plans changed this past Sunday, when a high-profile visit of Sephardic Rabbonim, along with Shas Minister Eli Yishai, were sent by Chacham Ovadia to the homes of the Gavad Eida Chareidis, and Maran Hagon Rav Eliyashiv Shlita.

At those meetings a compromise was made between the Gedolim.

According to the compromise – brokered by former Shas Chairman Aryeh Deri – Chacham Yosef added a restriction to his ruling, stating that a convert who did not really intend on adopting a religious lifestyle while undergoing the conversion process would not be recognized as a Jew.

According to reports, Rav Wosner had spoken on the phone this past Friday with Chacham Ovadia, and had arranged today’s meeting.

At the meeting, the two Poskim exchanged their latest Seforim with each other. Before parting, Rav Wosner reportedly asked Chacham Ovadia for his mothers name, so he can be Mispallel for his well being. The two Poskim said they would try and meet each other again in the near future.