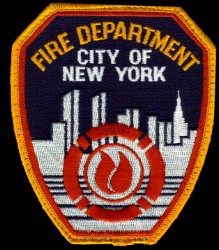 Mayor Michael R. Bloomberg and Fire Commissioner Salvatore J. Cassano today swore in 318 new Probationary Firefighters. The new firefighters, known as “probies,” will attend a rigorous training program at the Department’s Fire Academy located on Randall’s Island. Today’s class is the most diverse in the department’s history; 42 percent of the recruits are minority. The ceremony was held at the FDNY Fire Academy where Mayor Bloomberg and Commissioner Cassano congratulated the new probationary firefighters.

“With your promotion, New York City has its first class of probationary firefighters since 2008,” said Mayor Bloomberg. “Each of you understands the sacrifice the Department requires – after all, you have almost 1,500 years of combined service as emergency medical technicians and paramedics with the FDNY and you are now stepping forward to keep our city safe in new ways.”

“The Department is excited to have a new class of Probationary Firefighters for the first time in more than four years,” said Commissioner Cassano. “This new class is the most diverse in FDNY history and demonstrates the Department’s tremendous efforts to achieve our long-standing goal of diversifying our ranks and better representing the city we serve.”

Today’s class is the first Fire Department probationary class since 2008 and is the most diverse in FDNY history. More than 42 percent of the class is minority, including 14 percent African-American, 24 percent Hispanic and 4 percent Asian. The class includes six women. Previously the most diverse class was 2008 when 35 percent of the recruits were minority. All 318 members of the class have previously served the city as emergency medical technicians and paramedics with the FDNY Bureau of EMS.

Over the next 18 weeks the probies will be tested and trained at the FDNY Fire Academy. They will receive advanced training at the academy in fire suppression and medical response including training at the FDNY high-rise fire simulator, subway simulator – featuring actual NYC Transit trains, Hazmat training, collapse and confined space rescue training, and auto extrication. In classroom instruction, the probies will learn the fire code, peace officer training, building inspection as well as procedures for engine and ladder operations.

The FDNY is also responding to fires and other life threatening emergencies faster than ever. Firefighters now arrive on an average of 20 seconds faster than they did a decade ago and ambulance response times now average six minutes, thirty seconds – a one second improvement over the record set in 2011.