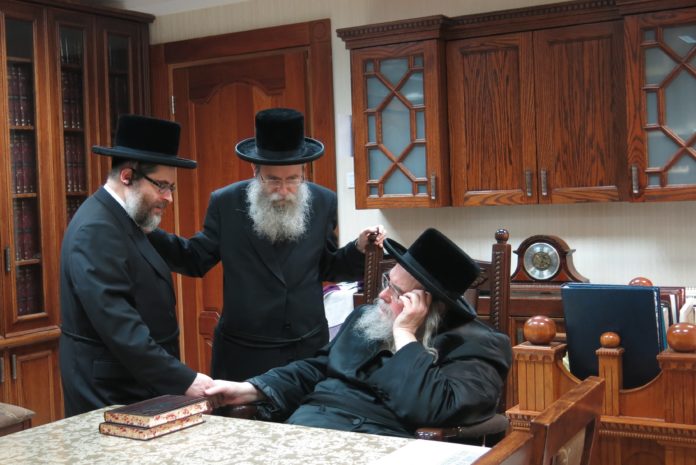 Five Million for Belz: How it will happen iy”h

In an historic move, on Monday, January 14th at 10am EST, Merkaz Mosdos Belz will beging to raise at least $5,000,000 in 30 hours to help keep the Mosdos afloat. We spoke to Rav Pinches Lerner, Director of the US Branch of Mosdos Belz who is spearheading this campaign.

A: Yes, it’s the highest goal ever set in a one day campaign. There are no matchers; it’s truly historic in many ways.

Q: Tell us a little about yourself and how you got involved with Belz?

I used to work in the food business. Around twenty years ago there was a dinner for Belz in America in which over 3,000 people attended and I helped arrange the entire dinner. Afterwards, the Rebbe asked me to come and work for Belz. He said it would be good for Belz and good for me. The former Director here was Rav Chaim Duvid Halberstam who was retiring at 85 after having served faithfully for many years. I sold my food business and took over here.

Q: Why the need to raise five million dollars now?

A: Besides for general donations, Belz relied on several individuals who used to give big money every year to the tune of several million dollars. For various personal reasons, they weren’t in the position to continue with their large donations. While we tried to find people to fill the gap, we were unsuccessful and we realized we need to rely on the tzibbur at large to help out the Mosdos.

Q: How did you come up with this method of a campaign, “Levavaini Eilav”, where Belzer Chassidim will try to raise money from family and friends this coming Tuesday?

A: We turned to the company Charidy who helped provide us with statistics that helped us plan this campaign. We learned that everyone who wants to help, has a circle of around 40 people they reach out and of those 40, around 15 people end up helping. We have around 8,000 Belzer Chassidim worldwide, outside of Eretz Yisrael. If less than half of the chassidim can raise around $1,500 in total from their inner circle of 15 people, then we can reach our goal of five million quite easily. Of course if more join in, it will be even more successful. People can visit www.WorldOfBelz.org for more information.

The annual budget is tens of millions of dollars, but we remain with a deficit of ten million dollars which we need to fundraise annually. With the issue this year with large donors falling out, we need to fill the gap desperately.

Q: What is the Belzer Rebbe’s involvement in this campaign?

A: The Mosdos opened in 1952 under the auspices of the Ruv zt”l, Reb Aron of Belz. The Ruv zt”l had over 70 family members killed during the war and he often said that “The bochurim in the yeshiva are my children; giving to the yeshiva it is as if you gave to me”. The Ruv shlit”a carries on with the same feelings of responsibility.

The Mosdos in Eretz Yisrael are the core of the chassidus. By age 16 almost all Belzer bochurim go to Eretz Yisrael to learn; they all have roots in Eretz YIsrael. The rebbe takes the support of the mosdos and the children very personally.

I’ll share with you an example. You might be aware that Belz has the first chassidish yeshiva in the world opened for Balei Teshuva. Additionally, today there are hundreds of children learning in our regular yeshivas whose parents are Balei Teshuva.

Another example of how the Ruv cares about the future of every individual: Although there are hundreds of Kollel Yungerleit who make “Torahso Umenaso”, long-term learning isn’t for everyone. After a few years in Kollel, many are looking for work to support their families. The Ruv, together with the Rosh Kollel of Belz Rav Pinchas Friedman, instituted a vocational training program. Yungerleit are given six months of paid training in the profession of their choice to help them earn a respectable living.

Q: What can you share about Belz that the average person is unaware about?

A: That’s a great question. Belz in Eretz Yisrael is the largest yeshiva system in the world, with over 14,000 children learning in Eretz Yisrael ( and another 13,000 across the world). There are thousands of students that come from impoverished homes and cannot afford basic or even discounted tuition. There is no such a thing as turning a child away for a lack of funds; the burden then falls on the kehilla and the mosdos to make up the cost.

The Ruv cares about every child as if it were his own. Several years ago, the Ruv called together all the menahilm of the yeshivas and girl schools for a meeting. As in any school, there are children who fall behind and are not as strong academically as their peers. Often, sadly these children are put into schools for learning disabled children, when all they need is a bit of help. The Ruv instituted that we hire 30% more staff with the direct goal being to give these students the extra help in the classroom they need so they don’t fall behind.

Q: How are you working on convincing Belzer chassidim to become fundraisers for one day; do you find that to be a challenge?

A: Baruch Hashem, that has not been a challenge. In fact, quite the opposite has happened. Chassidim from across the world are reaching out to us, asking how they can take part in this campaign and help the Ruv and the mosdos.

I think it’s similar to when someone is being honored at a choshuve dinner and enjoys the honor. He doesn’t feel like he is being imposed upon to help fundraise for the organization. This campaign is historic and Belzer chassidim truly feel honored to be a part in it.

What’s really interesting is how many people that feel connected to Belz and are not officially a “Belzer Chussid” reached out to us as well. Each person had their own reason for being connected and wanting to help, but it was really special to see the worldwide impact of Belz.

Q: I’m curious how you decide on an exact date for the campaign?

A: Tuesday is the ninth day of Shvat – which is the “Yom Hatzala” in Belz; the day we celebrate the miraculous rescue of the Belzer Rebbe zt”l. Tes Shvat is a day that is a celebration for not only Belz, but for all of Klal Yisrael. It had looked like that ch”v Belz would be one of the many chassidus that was lost forever in the war.

Today there are hundreds of Rabbonim throughout the world that received their education through Belz even though their kehillas are not Belzer ones. There are also hundreds of sefarim that impact Torah Jewry, written by Belzer Talmidei chachamim.

I will share with you a motto issued by the Belzer Ruv shlit”a that he repeats very often. He says that “Belzer mosdos exist to help Klal Yisrael, not only Belzer Mosdos”

The impact of Tes Shvat is universal and we hope that everyone will give thanks to Hashem and take part in this historic mitzvah opportunity.

visit WWW.CHARIDY.COM/BELZ OR VISIT WWW.WORLDOFBELZ.ORG TO TRACK THE PROGRESS AND TAKE PART IN THIS HISTORIC EVENT!