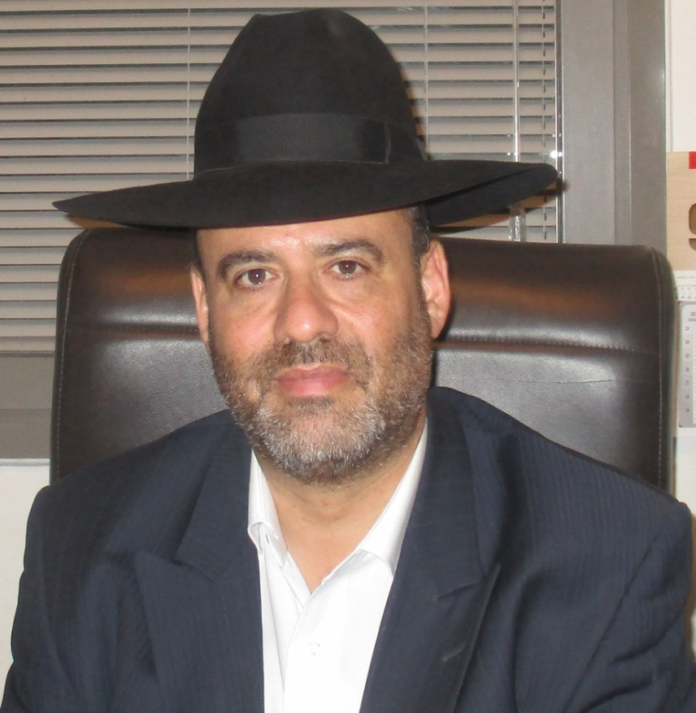 It’s not just remarkable -it’s incredible! On his website there are over a hundred (!) documented cases in the last year alone where Rav Hool has told people- he has never met- or even seen-exactly what physical ailments they have, just by doing the procedure! There are also -as of this writing- 58 documented cases where people have sent him emails confirming the yeshuoh they had after the procedure! Some of these yeshuos are literally staggering, like a woman who couldn’t lift her arm for two years, or a man who found parnossoh 72 hours after the procedure after 10 years of unemployment!

For Six years Rav Doniel Hool has been helping Yeiden around the world in matters like shidduchim, parnossoh, medical issues and so on-by doing the pouring of the lead procedure or Blei Gissen, to remove ayin horah.

Rav Hool only agrees to do the procedure if the client accepts upon himself to strengthen in a certain very small mitzvah of their choice.

Rav Hool says: “They don’t need to tell me what their kabolloh is, and it is not a verbal promise- just a 100% intention to carry on this mitzvah. Preferably it is something they should be doing anyway and it is easy to do. For example many people have undertaken to be makpid to say modeh ani before getting out of bed in the morning. I feel I need this mitzvah so we can have Siyyatah Dishmayoh for the procedure to be affective.”

Rav Hool’s clients include Roshey Yeshivah and dayyonim from all over the world. One Rosh Yeshivah had trouble in finding a mitzvah he could take on, as he thought he was already doing everything. Rav Hool suggested he says Mizmor LeDavid at every meal as brought in the Mishna Brurah, and the Rosh Yeshiva said “That’s a great idea- I will take that on!”

So in the last year alone, there are thousands of mitzvos being done! Rav Hool says, “As the mitzvos keep on building up, we have a more and more powerful zechus for the next procedure to bring a yeshuoh!

It is no small matter that a prominent rav has given his full endorsement! Here is the written endorsement he has from Hagaon Rav Mattisyahu Doitch Shlita Dayan of the Badatz eidah Chareides and Moreh D’asrah of Ramat Shlomo: 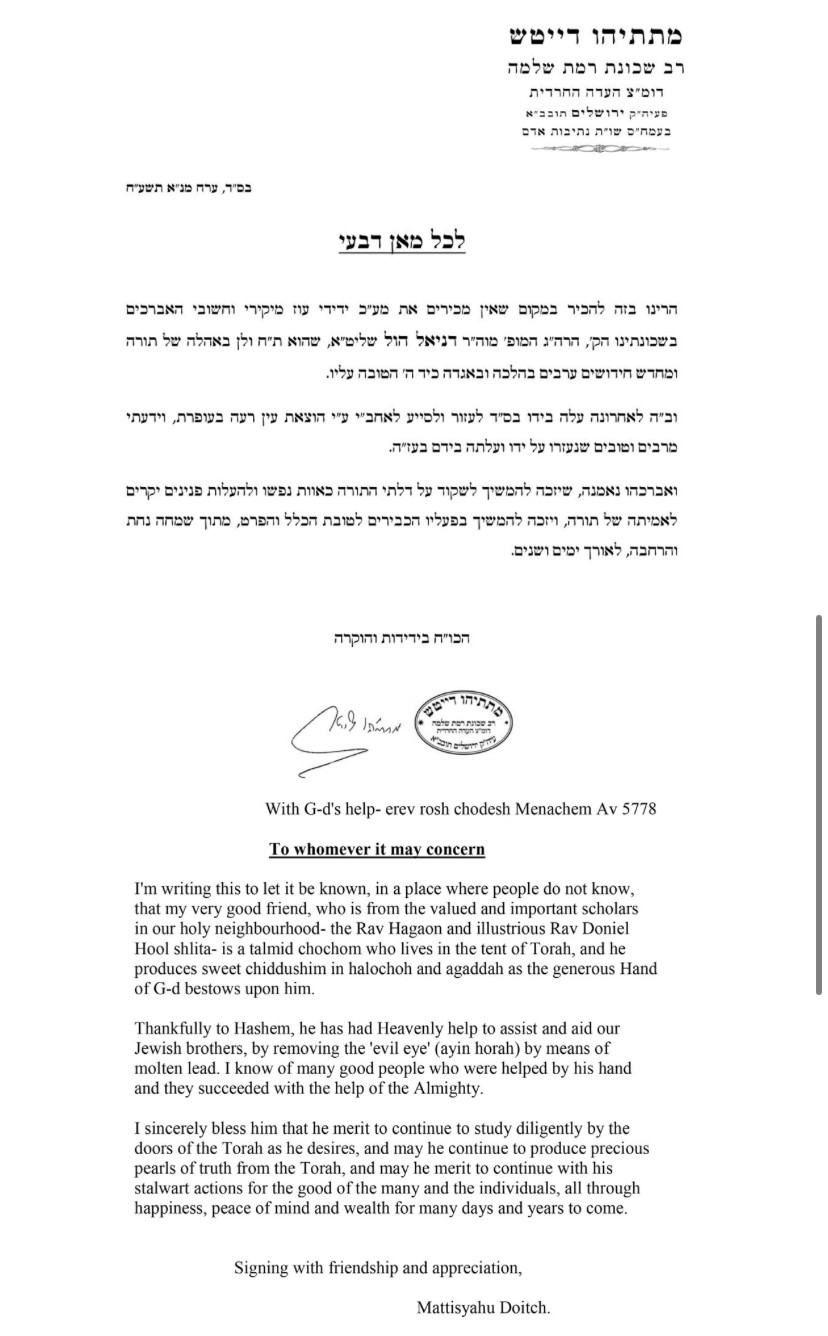 Rav Hool relates: “In order to obtain Hagaon Rav Mattissyahu Doitch’s written haskomoh- he tested me out! He gave me the name of a female and her mother’s name and asked if I could identify her problem. Without knowing anything at all about her, Boruch Hashem I told him where her problem was and the rav confirmed that he was told by her family about it and that this problem was preventing her getting a shidduch. B’Chasdey Hashem-two months later I was dancing at her chasunah!”

A talmid of Yeshivas Ponevez (12 years) and Mir (12 years), it is intriguing Rav Hool has gotten into such a thing. But he says “I saw the procedure works, and I know Hagaon Rav Yisroel Yaakov Fisher ztz’l sent hundreds of people to do the procedure. The Tzemach Tzeddek ztz’l even has a teshuvoh allowing the lead to be heated up on shabbos to try and save someone’s life! I was also told by a prominent Rosh Yeshiva’s wife that she knows for a fact Rav Elyashiv ztz’l had the procedure done for himself numerous times”.

Rav Hool says, “I am not promising miracles chas vesholom, I am just doing the procedure that Boruch Hashem seems to be very affective at helping people, and the zechus of the mitzvah they undertake will stand for them lenetzach netzochim!”

Also on his website is an audio lectures page where Rav Hool has some very interesting shiurim- of particular interest is the one on shmiras ha’eynayim where there has been some very positive feedback.

To order a procedure go to his website www.shevatiheyenoh.com – but be patient, there is a high demand for his services! 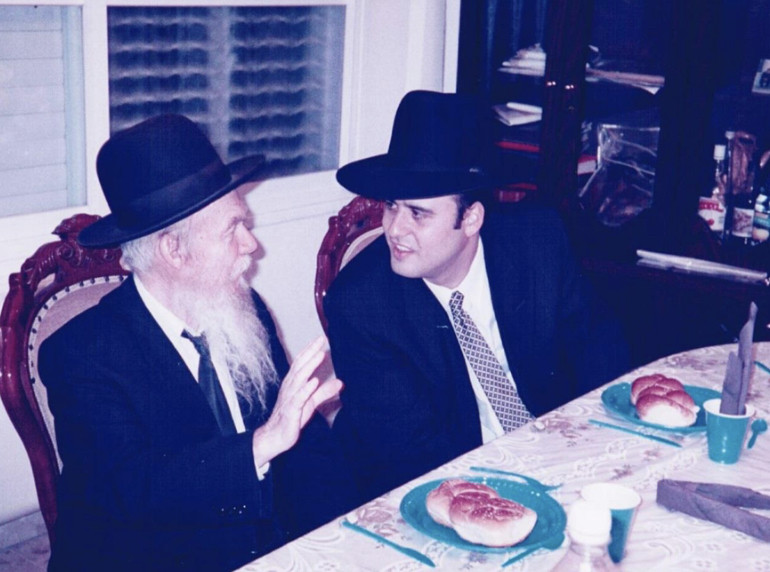 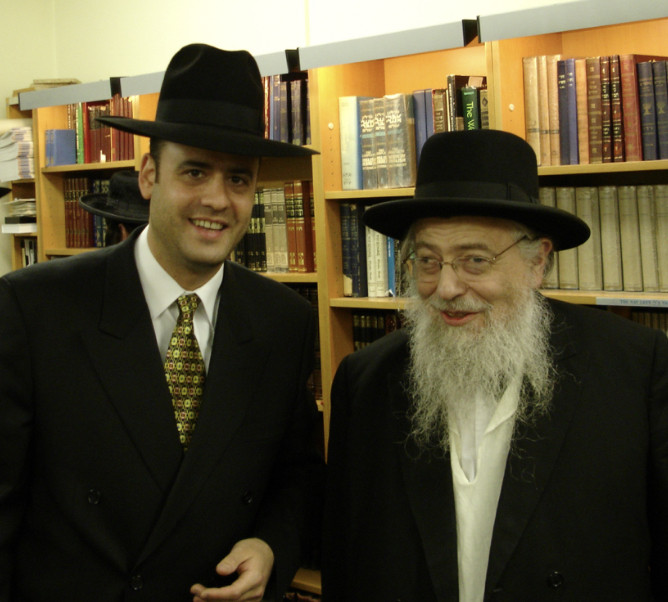