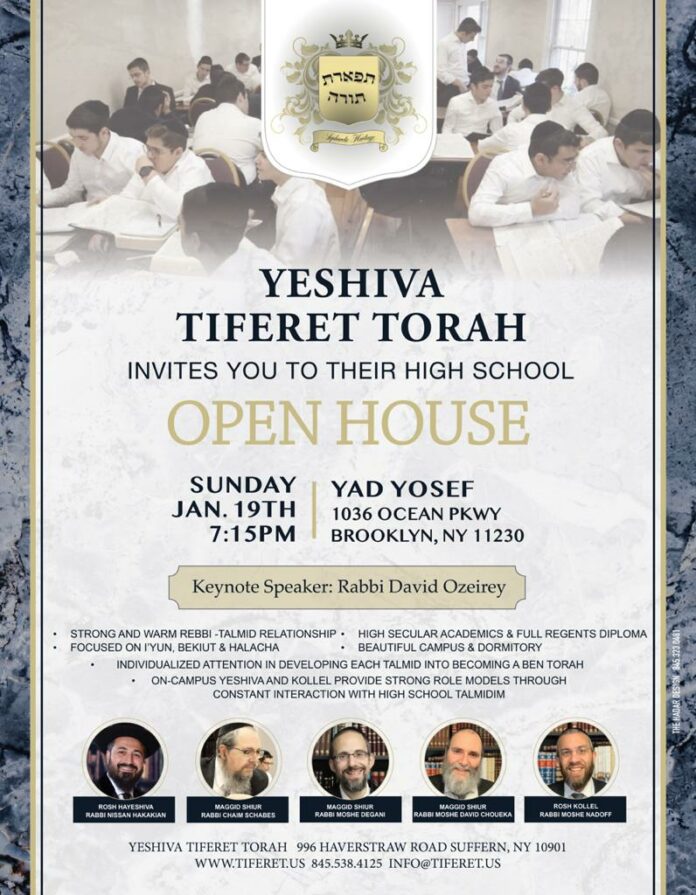 Metivta Tiferet Torah of Monsey is hosting their Open House on Sunday January 19 in Brooklyn featuring an address by Rabbi David Ozeirey. For over a decade the kol torah of Yeshivat Tiferet Torah’s top-notch overwhelmingly successful and active bet midrash and kollel programs has permeating its walls forming a new generation of talmidei chachamim all under the leadership of Rosh HaYeshiva Rabbi Nissan Hakakian. Metivta Tiferet Torah seemed the next logical step for an already bustling beacon of torah thought in Monsey. Established at the behest of many gedolei yisrael the high school was developed to enrich the Sephardic mesorah in each talmid that passes through its doors.

The yeshiva’s exquisite campus and on-campus dormitory provides a serene environment for the bachurim to thrive and grow as a family into bnei torah while maintaining immense pride in their distinct Sephardic lineage. Alef plus bachurim from around the globe are attracted to the yeshiva’s signature rebbe-talmid relationship and warmth and showcases its adherence to halachic standards and focus on iyun learning. The metivta promises to allow each talmid to truly excel within a rigorous curriculum steeped in Sephardic minhagim. A serious and solid bachur will shine from the limudei kodesh offerings including high-level gemara b’iyun shiurim, alongside bekiut, halacha, parsha, and mussar lectures all preparing the talmidim for a life of torah. A robust secular education culminating in a full Regents diploma is provided allowing each student to transform into a well-rounded adult capable approaching any sugya.

The current ninth grade and tenth grade classes each are groups of close-knit self-motivated pupils that have earned the metivta rave reviews in the Sephardic community at large. One can truly feel the kol torah throughout the day and watch as the boys grow from one another as they embrace their Sephardic heritage. The Rosh HaYeshiva is on campus from early in the morning until late at night and a dorm counselor is fully knowledgeable of any ongoing. The yeshiva prides itself on its shmira maintaining a clean campus void of the distractions of cellphones. The excitement of the bachurim keeps the campus lively with an in-shabbos biweekly.

The roster of respected rebbeim comprised of Rabbi Moshe David Choueka, Rabbi Moshe Degani and Rabbi Chaim Schabes as maggidei shiur and Rabbi Moshe Nadoff as the Rosh Kollel. Each rav incorporates their unique methodologies to uplift the bet midrash’s atmosphere with dedication, care and warmth to each individual talmid enabling them to surpass their potential and obtain new heights. Rabbi Chaim Schabes leads a shiur allowing the sweetness of the torah to come forth. These lofty goals are empowered by the consistent presence and interaction of the yeshiva’s twelve avrechi kollel and twenty bet midrash bachurim serving as inspiring role models. The boys flourish on their newfound skills evolving into true bnei torah.

The goal is for each bachur to reach his utmost potential with a focus on iyun learning. When a student leaves the yeshiva the goal is for them to be well versed in their way around halachot and be very successful. The yeshiva encourages each student to grow from positive enforcements. The yeshiva recognizes the triumphs of its students and encourages all to strive for higher reaches. 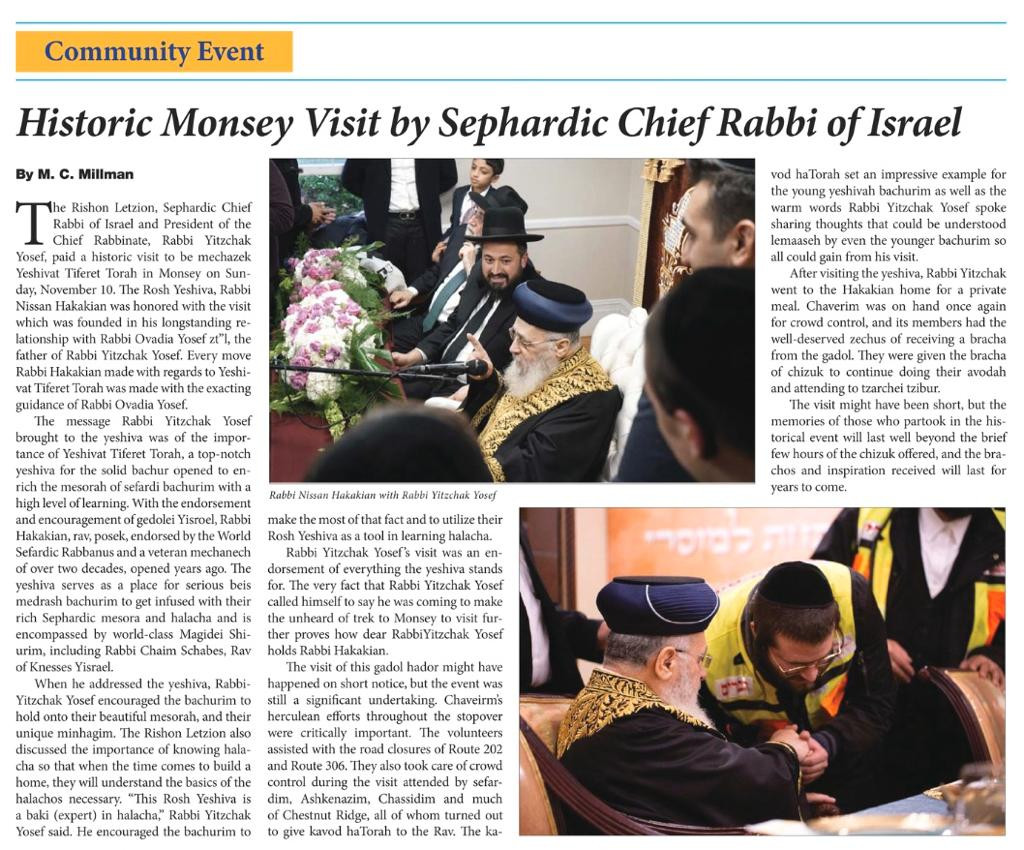