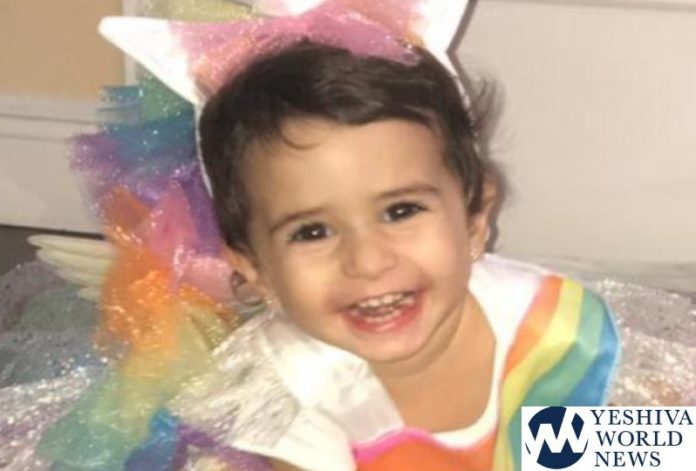 In an unprecedented act of Chesed, more than 23,000 clicked on The Chesed Fund, and donated money to save the life of a 2 year old child.

As of 8:00AM on Monday morning they were still $1 Million short of the funds needed, but in just 4 hours, people united and donated all the money needed. On Monday at around noon time, one generous donor gave a $285,000 donation, which helped them reach their goal of $2.2. Million.

AT 12:00PM, the fund was closed, and the following statement was released from the family:

When we began this campaign 4 days ago, we embarked upon the impossible. We desperately needed to raise 2M+ in the course of a few days to save of the life of our daughter Eliana. Very quickly, Klal Yisroel joined together and in an unprecedented display of Achdus, this lifesaving campaign gathered force. With great Siyata Dishamya and B’chasdei Hashem, we were able to reach this unprecedented goal and are now in a position to receive the miracle drug.

We want to take the opportunity to recognize and thank each and every one of you for your tefillos and generous support.

Please continue to pray for Chana bas Shani, as we still have a long way to go!

Earlier story is posted below:

But she cannot stand or walk.

After visiting many doctors and specialists, her parents finally got the diagnoses – Eliana has a rare genetic disorder called SMA2. As it progresses, she may even lose the ability to breath and eat on her own.

But there’s a glimmer of hope – a unique medication has just been developed, a miracle drug called Zolgensma. This medication can literally regenerate the missing gene.

This medication is so rare, and so new, that it costs a whopping $2.2 million dollars for a single dose. A single, life-saving injection. Insurance is refusing to cover the costs of this drug, despite attempts by doctors and lawyers to appeal the decision.

To make matters worse, Eliana only has until this coming Friday to receive the dose. Eliana’s birthday is on Friday. She turns two. And the FDA doesn’t approve the drug for anyone over two years old.

Her fate will be sealed on her birthday.

A desperate crowdfunding campaign has been launched to save Eliana. Using the commission-free Chesed Fund crowdfunding platform, where every dollar goes right to the cause, Eliana’s family has managed to raise $1.5 MILLION in just three days.

Over 18,000 people have stepped up, most of whom have never heard of Eliana before. But they have united to try to save her life.

The success of this campaign is unprecedented, and yet it is so far from its goal. Eliana and her family are banking on random strangers to continue to step up and make the difference.

“If you save one life, it’s as if you save the entire world.”