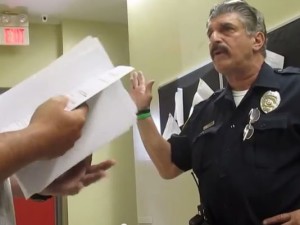 A New Jersey police officer is under investigation after he was videotaped making comments about President Barack Obama and the Constitution.

Part-time Officer Richard Recine was called to the Helmetta town hall Monday because resident Steve Wronko was seen videotaping. Wronko insisted he had a constitutional right to make the recording.

Police Director Robert Manney tells the Courier News of Bridgewater he’s spoken to the officer and the comments were an “embarrassment.” Manney says the investigation should be completed swiftly.

Recine earns an hourly wage while collecting a $79,000 pension after retiring from the Franklin police department in 2006. The Associated Press was unable to locate a phone listing for him.