YWN regrets to inform you of the Petira of Reb Moshe Zev HaKohen Gordon Z”L. He was 70-years-old.

Reb Moshe was a longtime Talmid of the Mirrer Yeshiva in Flatbush.

He was the founder and proprietor of Chap-A-Nosh – the first Fleishig restaurant in Flatbush, and eventually expanded to become a caterer at the Marina-Del-Ray wedding hall in the Bronx.

After becoming a successful businessman, Reb Moshe sold his business and returned to the Mirrer Yeshiva, where he learned half a day for many years.

He was a tremendous Baal Chesed, and quietly gave a tremendous amount to Tzedakah. He assisted dozens upon dozens of people with Sholom Bayis issues as well as helped many people arbitrate their Gitten and divorces – never taking a dollar.

He had a very close Kesher to Maran Hagaon HaRav Shach ZATZAL, as well as Hagaon HaRav Elya Svei ZATZAL. In fact, it was Reb Moshe Gordon that Rav Shach asked to help in opening the Yated newspaper in America.

Unfortunately, he was sick the past year and despite suffering tremendous Yesurim, he never wavered in his incredible Emunah and Bitachon.

He was Niftar in the presence of his family early Thursday morning.

He is survived by his two daughters: Mrs. Devorah Chafetz (wife of Reb Yanky – Lakewood), and Mrs. Dina Plopper (wife of Reb Yaakov Dovid – Lakewood); His two brothers: Reb Yankel and Reb Yeruchim; His two sisters, Mrs Sommers and Mrs Farzichiter; and many grandchildren – all following is his ways of Torah and Chesed.

He was predeceased by his wife Mrs. Raizy Gordon approximately 22 years ago.

The Levaya will be today (Thursday) by the Mirrer Yeshiva in Flatbush at 11:45AM and will proceed to Lakewood where the levaya will be held at 3:00PM the Chapel located at 613 Ramsey Street, followed by the Kevura in Lakewood.

The Shiva will be held at the home of the Niftar in Flatbush at 1594 East 10 Street between Avenue O and Avenue P. 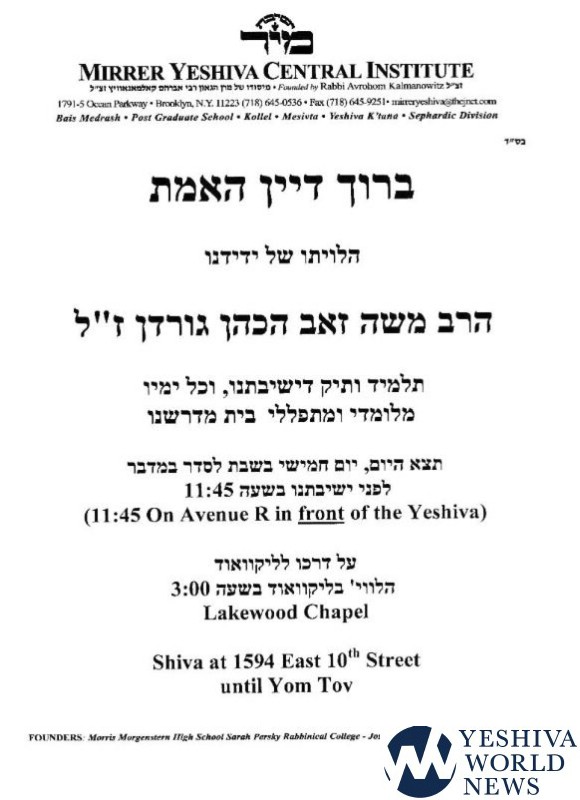