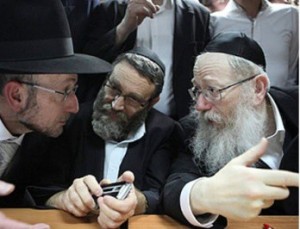 After Minister of Industry & Trade Naftali Bennett unveiled details of his chareidi draft plan, chareidi MKs responded with anger. The plan detailed in part by Bennett at the Sixth Lod Conference was met by a large measure of agitation and harsh reactions from chareidi elected officials.

MK (Yahadut Hatorah) Yaakov Litzman stated “He is violating the traditional and legal status of the bnei yeshivos who have declared Torah study as their profession”. Litzman added that despite efforts to set quotas and limit the number of talmidim who may continue learning, “The Torah world of the yeshivos will continue flourishing quantitatively and qualitatively and there is no power that will succeed to harm those who are committed to a life of Torah.”

MK (Yahadut Hatorah) Meir Porush added “Anyone with a hand or a role in the new arrangement that intends to harm bnei yeshivos and the current arrangement, the arrangement that existed to date will be remembered for eternal disgrace.”

“The eternal Jewish People have stood firm throughout history in the face of many trials and tribulations. There is no doubt that we will succeed in the face of these gezeiros as well,” he concluded.

Shas MK Nissim Ze’ev called Bennett’s plan “utter nonsense”, confident it will not be implemented as Bennett plans. Ze’ev feels it is impossible to limit of number of lomdei Torah to 1,800 annually, questioning how such a regulation will be enforced. “There is no way the Torah world and roshei yeshiva will agree to permit implementation of the program. The idea of a quota system is undemocratic and reminiscent of regimes of the past. There is a historical relevance to these decisions.”