Many Jews are feeling uncomfortable regarding the “Occupy Wall Street” protests which YWN has been reporting about. The reasons for these “uncomfortable feelings” don’t need to be elaborated on this page. Suffice to say that Jews have been blamed for the world’s troubles for thousands of years, and many are nervous that this finger-pointing will soon start – or , maybe it already has.

Columnist Yossi Gestenter, whose articles appear quite frequently on YWN, submitted an op-ed for publishing following President Obama’s speech Thursday morning. Before we publish his op-ed, we are publishing the following article from The Blaze. Unfortunately, only one of the videos (the main one) will be published due to the profanity and vulgar language in them:

We’ve been reporting on the Occupy Wall St. protesters for some time now, but we haven’t seen any signs of racism. Until now. But are they the ramblings of a disturbed man?

National Review correspondent Charles Cooke posted video Tuesday of a young man berating an older Jewish man, calling him a bum (it seems in response to being called the same term), mocking him by asking him if he speaks English, and telling him to “go back to Israel.”

Moments after I arrived, I saw a Jewish gentleman being berated when he criticized a protester. (Shortly after my video camera was switched off, he (inexplicably) shouted the N-word at the same man.)

Here’s the shocking video (Click HERE to view from a mobile device):

As you can hear in the video, the man claims to be part of a local plumber’s union. But that could be erroneous, as Cooke notes he claimed to be a lot of things: “he told me that he was white, Puerto Rican, Jewish, and African-American. I suggested he was, in fact, Confused, but he didn’t take much to that.”

Also heard in the video is that the man goes by the name “lotion man” and tells Cooke to look him up on YouTube. We did, and what we found is quite disturbing.

According to one video, “Lotion Man” is actually someone named Danny Cline. In the video, he can be seen getting into another verbal argument, using extremely vulgar language, and repeatedly using racial slurs.

In a second video on YouTube, “Lotion Man” is seen trying to pierce his tongue with an earring and again saying some wild, whacky, and disturbed things.

And finally, a third video shows “Lotion Man” actually harassing some people while later bragging about meeting some of the celebrities that came down to the park to join the protests.

The latter videos raise the proposition that the first video could be the ramblings of a very unstable man. 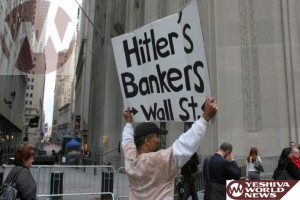 YWN points out that there has been only one other video or report (that we know of) of an anti-semitic act at the protests. In that video a man is standing and holding a large sign which says “Hitler’s Bankers Wall Street”, and “Nazi Bankers Wall Street”. The man stood alone, and was confronted by dozens of people. The video, available on YouTube was not posted here due to the profane and vulgar language. (Click on image by Shimon Gifter to enlarge)

The following is the op-ed by Yossi Gestetner:

Anti-Semite: I am against corporations because they don’t pay me money…. Seven dollars an hour…

Anti-Semite: I have got a job, Mo.

Anti-Semite: I do have a job.

Jew: You are standing here… Bum.

Anti-Semite: You are a Bum, Jew!

Anti-Semite: I am a Jew. Why are you fighting with us. O… YOU HAVE GOT THE MONEY THAT’S WHY YOU ARE Fighting, you Jewish man…

Jew: I have got the money because I have worked before.

Anti-Semite: My mother died from a heart attack.

Anti-Semite: What? Due? Du du du… you can’t even speak English. Are you Israeli? Go Back to Israel.

Jew: Why would I go back?

Anti-Semite: Go back to Sholom Israel.

If President Obama understands that ALL Republican presidential candidates needed to condemn the three four people out of 6,000 Republicans at a debate who boo-ed DADT, then the President should come out and condemn this too.

Or you accept that the people who occupy Wall Street are a load of clowns not worthy of any recognition, or – as the president did – you validate them and as such you denounce any hateful anti-Semitic rhetoric coming from that camp. Obama and his backers cannot have it both ways!

Yossi Gestetner is a New York-Based Writer and Marketing Consultant in the Orthodox Jewish/Hasidic Communities. His Firm “Gestetner & Co” Serves Political, Charitable and Corporate accounts. Yossi can be reached via [email protected]