Keeping to their word to increase the police presence in Jewish communities in New York City, the NYPD Chief of Community Affairs, Jeffrey Maddrey, took a few hours out of his busy schedule to personally walk the streets of Flabush this week.

It was an incredible visit, as the Chief was joined by two dozen Officers of the NYPD Brass. Every Commanding Officer from the local precincts, as well as the Commanding Officer of Community Affairs Outreach, Deputy Inspector Richie Taylor was there. From the Jewish community, the Chief was joined by Flatbush Shomrim Coordinator Tzvi Weil, Flatbush Hatzolah Coordinator Moshe Wulliger, Councilman Kalman Yeger, Senator Simcha Felder, Yehuda Eckstein, Police Liaison, Josh Mehlman from the FJCC and many others.

The group was graciously hosted by Benny’s Pizza on Avenue M and East 18th street, where everyone was treated to fresh pizza and cold drinks. The group then walked to Elegant Linen, Judaica Place, Ice Cream House, and Amazing Savings, where the Chief spoke to store owners and listened to their concerns. He stopped to speak with random pedestrians along the way, as he showed deep concern to their issues and fears. He was very reassuring, and promised everyone that the police will not let up on their extra patrols, and promised that every hate crime suspect will be swiftly arrested.

The visit ended with a tour of Flatbush Hatzolah Headquarters, where the Chief was given a behind-the-scenes look at the sophisticated dispatch system that Hatzolah uses.

While at Benny’s Pizza, the Chief took the opportunity to thank everyone for the warm welcome, and pledged to continue making sure that the NYPD have a strong presence on the streets. He thanked Flatbush Shomrim for their dedication to assisting the police, and publicly thanked Deputy Inspector Richie Taylor and Lieutenant Ira Jablon of Brooklyn South Community Affairs.

At Judaica Place, the Chief was presented with a plaque thanking the NYPD for their incredible response and working relationship with the community. The Chief was thrilled to have been given his first Yarmulka, which he proudly wore when he walked out of the store. “No one should ever be afraid to wear a Yarmulka, or any other religious items on the streets”, Chief Maddrey proudly stated.

“This is the beauty of New York City. We are so many denominations all peacefully living together, and that’s our goal – to continue this wonderful way of life that we have been blessed with”, Chief Maddrey said.

On behalf of the entire Jewish community of New York City, we thank Chief Maddrey for his leadership, his friendship, and for his service to our diverse communities!

“I’m grateful to Chief Maddrey, Deputy Inspector Taylor and the NYPD leadership who spent the last several days reassuring our community that we will receive the protection we need and deserve. We’ve already begun to see the results of our partnership, with new deployments and additional resources into our neighborhoods. I know we will continue working together to identify problem locations, and the NYPD has assured me that it will continue deploying the necessary resources to our community.” –Councilman Kalman Yeger

“I am pleased to see the enormous support that the NYPD and in particular Chief Jeffrey Maddrey and Deputy Inspector Richie Taylor of Community Affairs, have shown throughout the district over the past few days. It is clear to me that they have been working tirelessly to improve security and return a sense of safety to the people who live and work here. I am especially grateful for the increased police presence that has begun to put people at ease.” – Senator Simcha Felder.

Chief Jeffrey Maddrey joined the New York City Police Department in April 1991 and began his career on patrol in the 110 Precinct. He has also served in the 60, 67, 70, 72, 73, 75 and 77 Precincts, the Brooklyn South Task Force, Patrol Borough Brooklyn South, and Patrol Borough Brooklyn North. He was promoted to Sergeant in February 1998; Lieutenant in March 2001; Captain in May 2003; Deputy Inspector in December 2006; Inspector in November 2008; Deputy Chief in December 2011; Assistant Chief in March 2015 and Chief of Community Affairs in July 2020.

Following a high-level emergency meeting on Friday at City Hall with Mayor DeBlasio, Agudath Israel and other Jewish leaders, a high-police presence was promised. A meeting was also held at Misaskim Headquarters on Friday where police chiefs and every local precinct commander attended, and promised to step-up patrols.

On Sunday, DeBlasio visited Boro Park, where he vowed that the suspects would all be arrested and brought to justice. If that wasn’t enough, NYPD Chief of Patrol Rodney Harrison spent three hours on Sunday walking the streets of Avenue J in Flatbush, and the day ended with a visit by NYPD Commissioner Dermot Shea to the Agudah of Avenue L, where he met with local residents and addressed the congregation.

True to their word, the community has never before seen such an incredibly large police presence. There have been dozens of extra police cars flooding the streets, with police at Yeshivas and Shuls all over Flatbush and Boro Park.

VIDEOS AND PHOTOS VIA SHIMON GIFTER 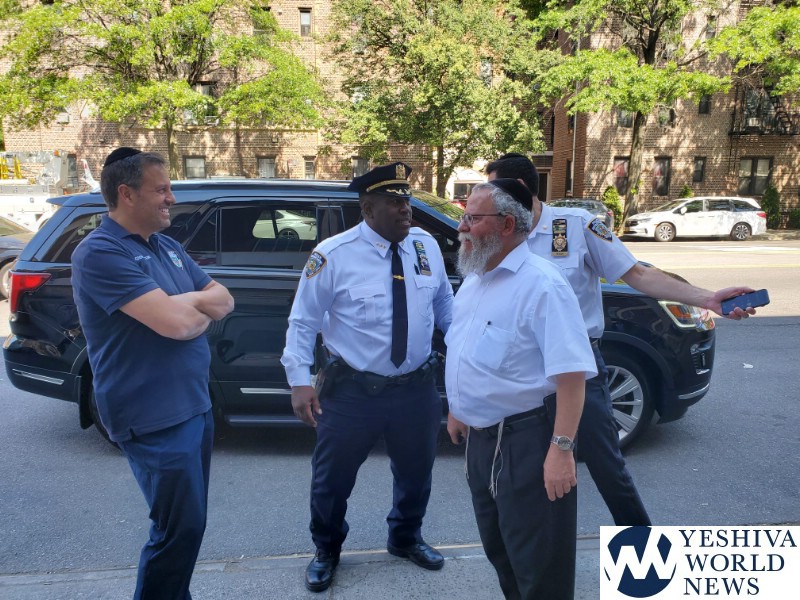 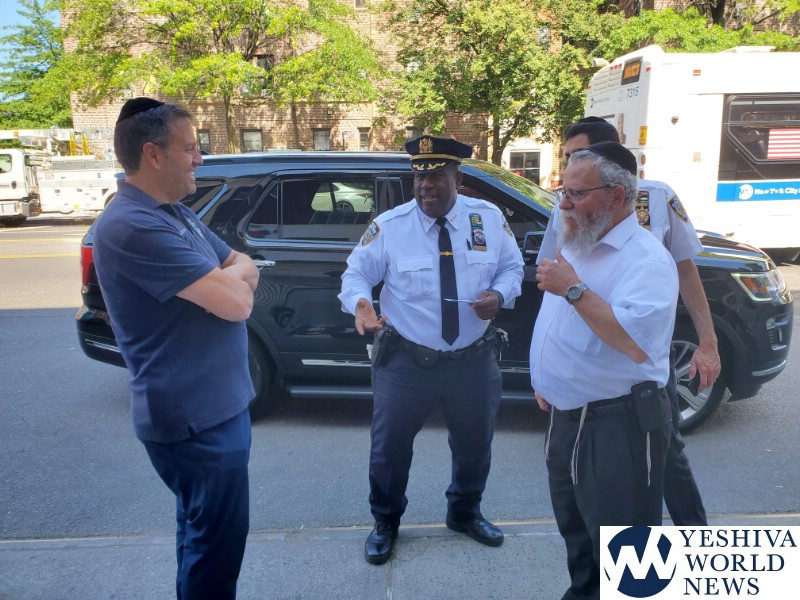 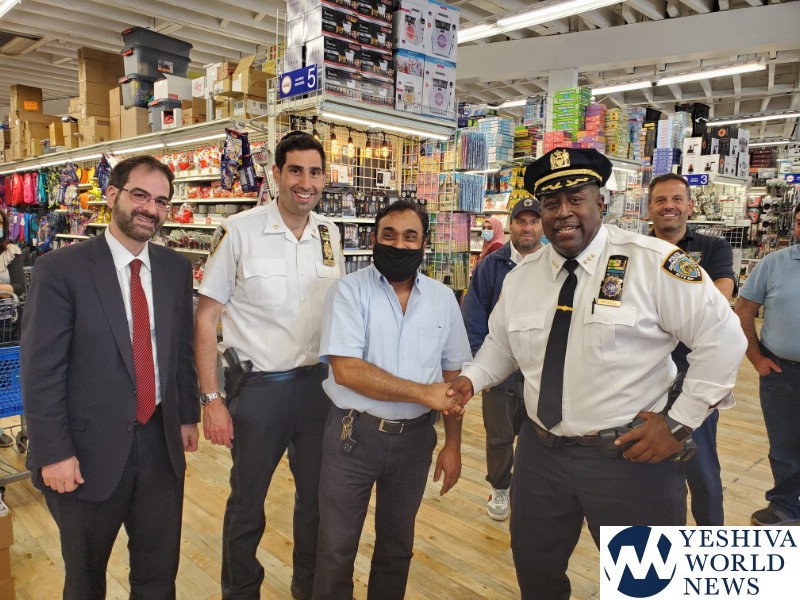 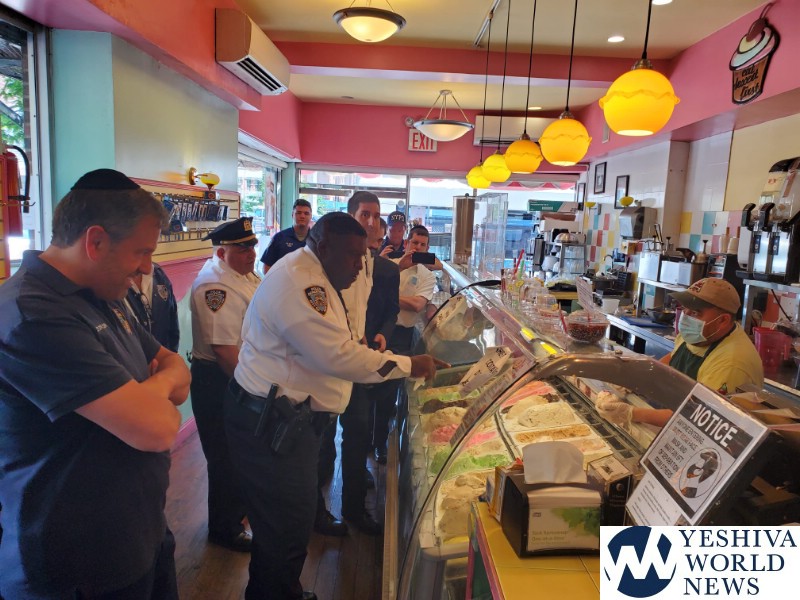 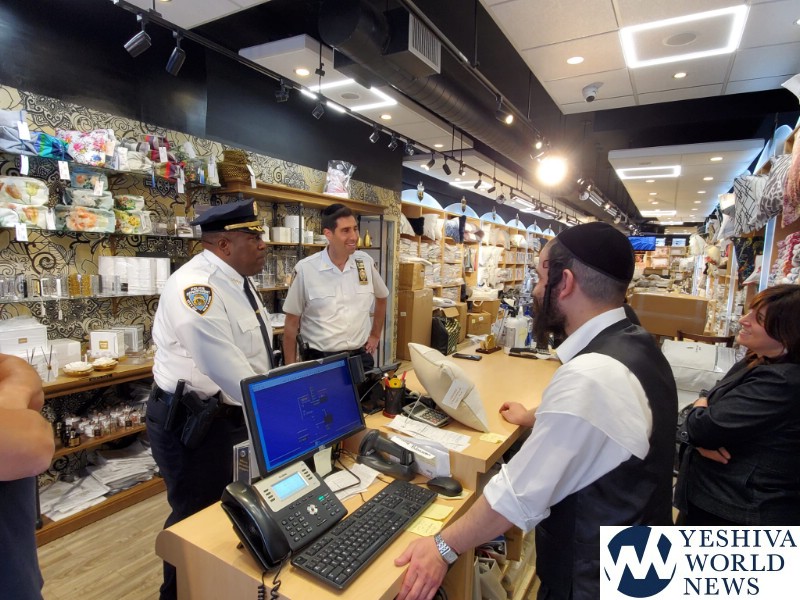 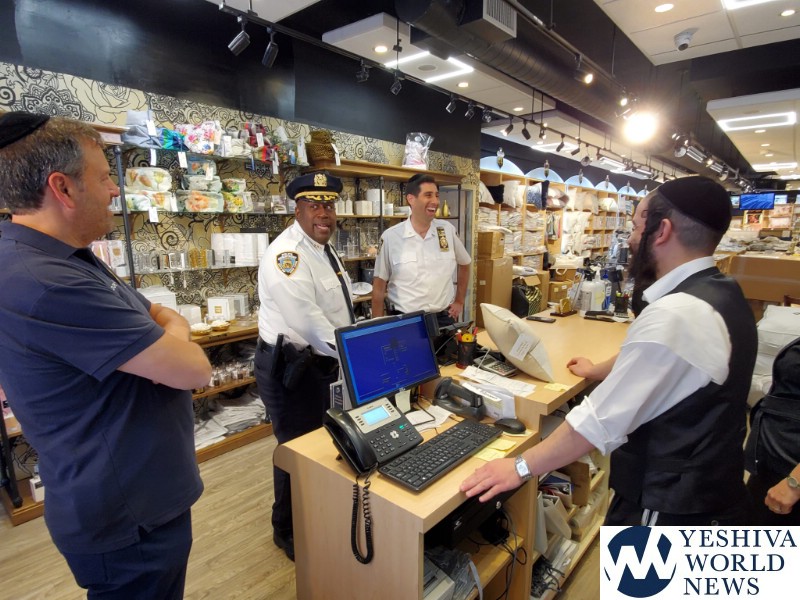 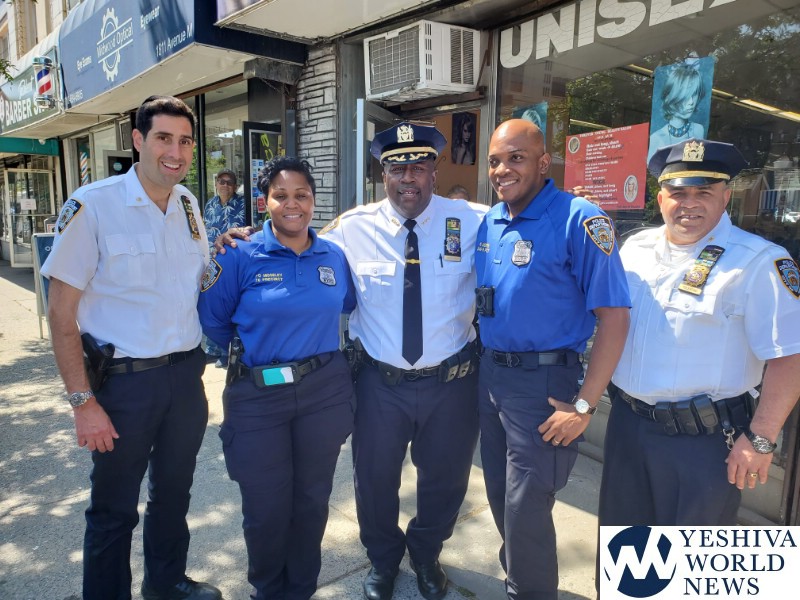 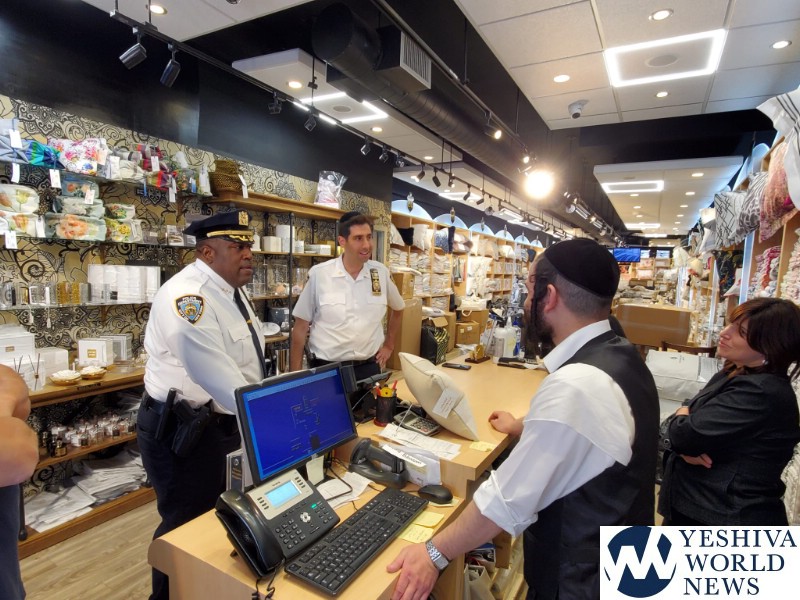 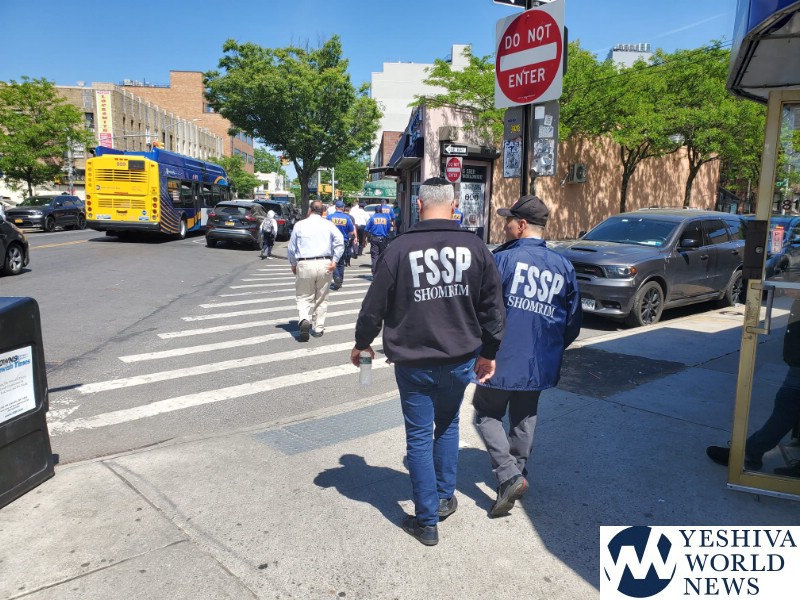 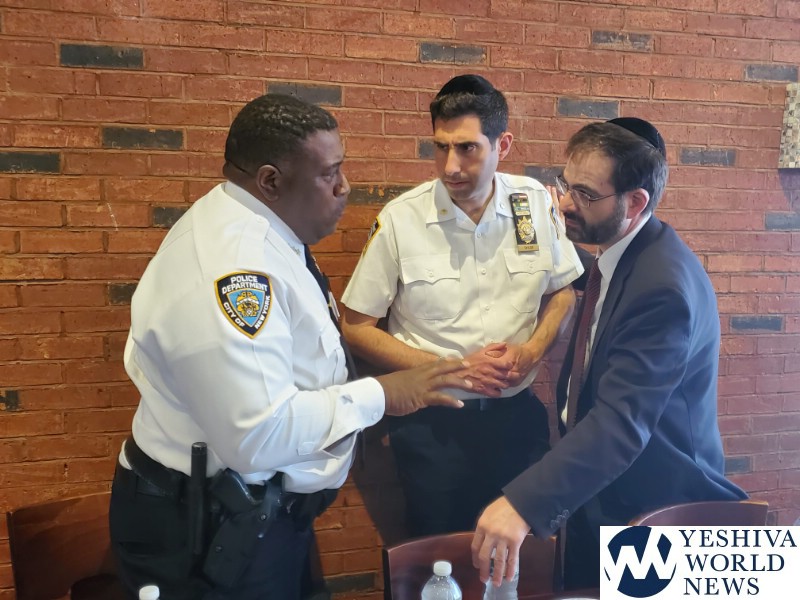 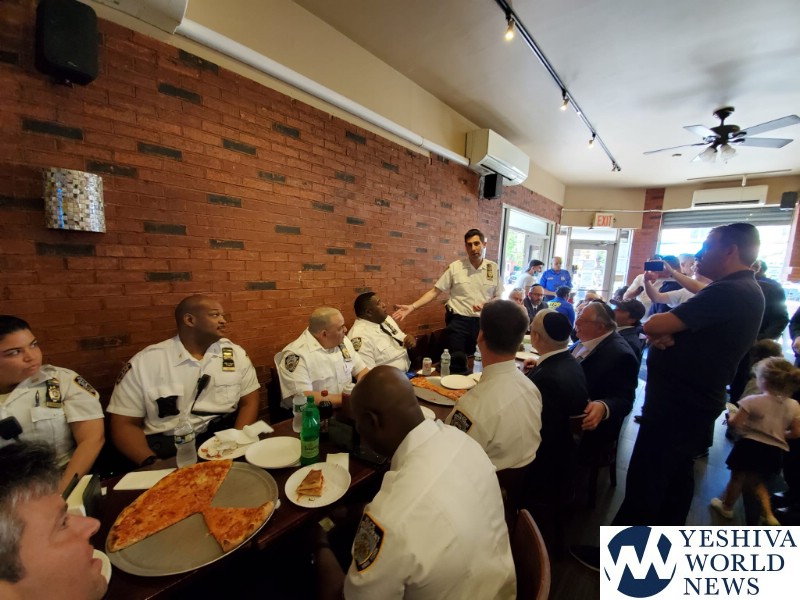 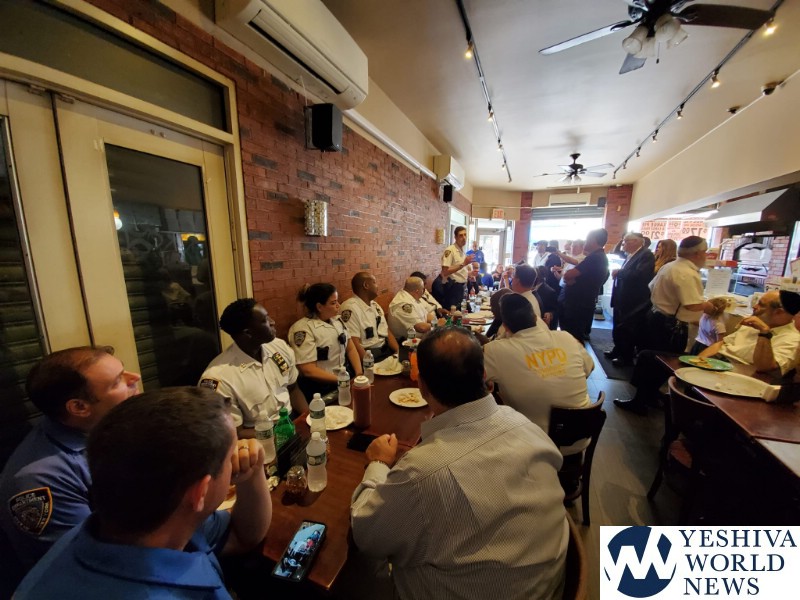