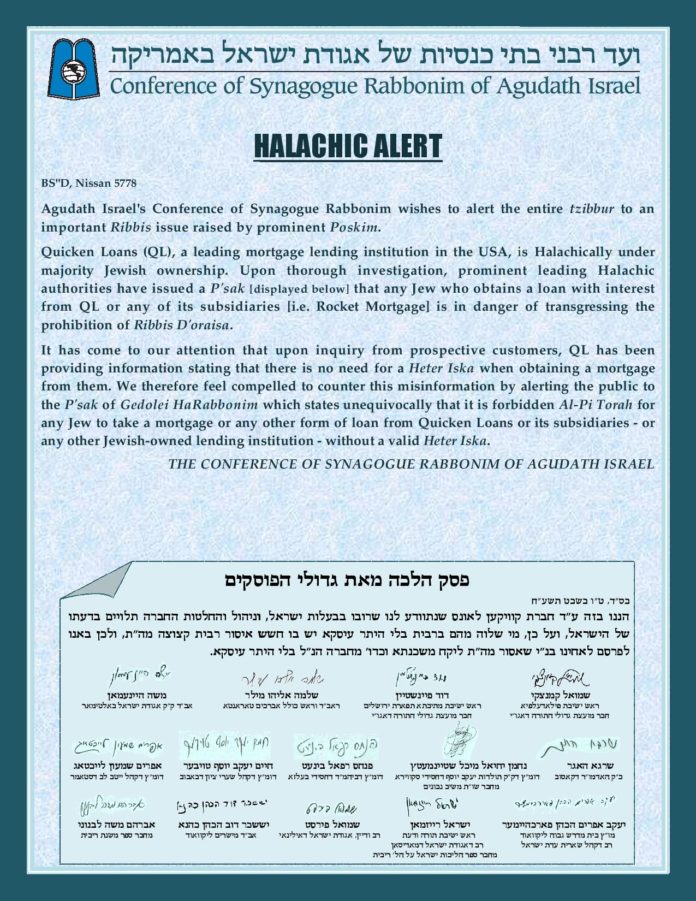 Before we get into the details, however, let us try to provide some philosophical explanation for the underlying prohibition of Ribis.  Imagine the following scenario:

The family lives in the old country.  The eldest son has emigrated and has made it to New York and has an apartment in the Lower East Side of Manhattan.  Another son is about to seek his fortune in New York and needs a place to stay.  He arrives at the brother’s house.  The brother tells him, “Look, brother, you can stay in my apartment, no problem.  And I will even charge you less than the Motel Six rates.  It will only be $40 per night!”  The parents would certainly be upset at their eldest son’s behavior.  This is not the way one behaves with a brother.

By the same token, the Torah views all Jewish people as one family.  When a brother or sister needs a loan, therefore, we do not charge them interest, just as we would not charge them rent when they stay by us.  Indeed, there are six prohibitions in the Torah associated with charging interest.  The prohibition is called “Ribis” interest or “Neshech.”  Anyone who has ever taken out an interest bearing loan can appreciate the fact that Neshech comes from the Hebrew root word, “bite.”  Interest payments certainly do feel like a serious snake bite.

The problem is that it is owned by a corporation that is mostly owned and controlled by a Jew named Dan Gilbert and unless something called a “Heter Iskah” is implemented by the owner of the corporation, there are numerous prohibitions involved in obtaining a mortgage through this company.

Rav Yisroel Reisman Shlita, a noted Posaik, Rav, Rosh Yeshiva and author of ArtScroll’s “The Laws of Ribis”, told this author, “We are disappointed that Quicken Loans does not allow the use of a heter Iskah for those who request to do so.  Therefore, we cannot avail ourselves of loans from them.  There is 77% Jewish ownership of this company.”

However, this solution was not as financially reassuring to lenders as they would have wanted.  Thus, Rav Yisroel Isserlin (1390-1460), author of the Trumas HaDeshen (#302), developed a concept that the active partner would not be believed to say that there were losses unless two specific witnesses testified to that effect.

Eventually, the Maharam (Vol. II #216), Rav Menachem Mendel Ben Avigdor the Av Beis Din of Cracow, expanded this concept to also include the active partner not being believed on the profits as well.  He made a number of other tweaks along the way.  One of them was the institution of a Knas, a fine, instead of the active partner taking an oath.  The knas – could actually be a formula that mimics interest. The Mabit (Vol. I #244) also made some tweaks and updates.

DOES THE PROHIBITION APPLY TO CORPORATIONS?

Rav Moshe Feinstein zt”l (Igros Moshe YD II #62) writes that a person may loan money to a corporation without violating the restriction of Ribis.  Some Poskim disagree with this leniency.  Regardless, even Rav Moshe would agree that the prohibition exists when the borrower is an individual and not a corporation.

Generally speaking the issue of how halacha looks at a bank has been the subject of great debate for well over a century.  The Kitzur Shulchan Aruch (65:28) even forbade depositing funds in a bank where they would lend to Jewish clients.  The Shoel uMaishiv (MK III #31) disagreed but did agree that a Jewish owned bank would be subject to issues of ribis.  The Maharam Shick (YD #158) viewed a corporation as a unique entity but only permitted it to collect Rabbinically forbidden ribis – not regular interest.  The Maharshag (YD #5) held a similar view.  The previous Poskim, however, seemed to view corporations as a form of partnership

CAN A HETER ISKAH BE USED FOR A PERSONAL LOAN?

The Sho’el u’Mayshiv (Vol. III #170) rules that it can, but other Poskim rule that it cannot, even though the Maharam permitted it as well.  Some have developed a method where the acting partner must have certain other assets available that can also earn profits and that the active partner must take halachic possession of this in order to allow the funds of the silent partner to be used for personal use.

MUST A HETER ISKAH BE LEGALLY ENFORCEABLE?

Does the Heter Iska have to be a legally enforceable document or may it simply be a halachic document?  Dayan Blau zt”l held that it did not (See also Sefer Bris Yehudah #40).  Others, however, seem to be of the opinion that it does need to be legally enforceable

WHAT DOES ONE DO IF IT WAS DONE ALREADY?

What should one do if the loan is already a done deal?  May the ribis be paid anyway?  Doesn’t Quicken sell off the loan immediately?  Many Poskim have stated that the loan must be refinanced as soon as possible.  There are some solutions that may perhaps mitigate the problem, such as having the payments made automatically where the bank is doing it rather than the individual.  Others have questioned this approach since the borrower has still arranged for a ribis payment.  Another approach is to make the ribis portion of the payment hefker – ownerless and allow someone else to take this money and pay the bank.  This is risky because that other party may actually keep that money of he or she wishes.  These questions are fairly complex, so each borrower should consult his or her own Rav or Posaik.

If this is correct, then the last payments the borrower would be making would be considered ribis – rather than a portion of the first one or two payments (assuming that it was sold after this point).

Yet this is difficult to consider since the state banking laws in every state is that the amortization schedule tables are set in how to calculate payoff amounts and that the consumer must be informed of them.   Regardless, each person should ask his Rav or Posaik what part of his payments are considered ribis and what is considered the principal.  It is this author’s contention and understanding that since state law determines what is considered the principal and the interest – the whole loan is halachically considered as a bunch of mini loans bound together.

There is a huge difference in this regard as to how to deal with the payments of the loan that have exceeded the original loan amount.

At this point, however, this company does not seem to have agreed to work with a heter iska, so caveat mutuum – borrower beware.