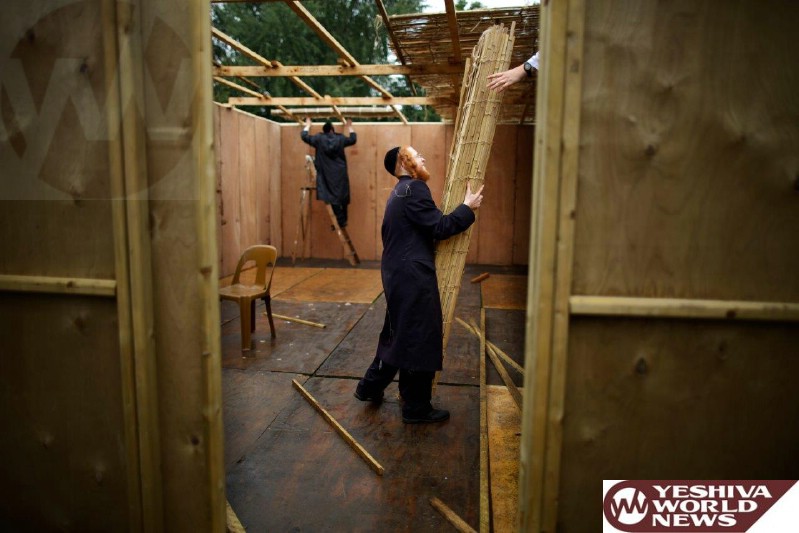 It is a question every wife asks her husband.  “Can I give a piece of cake to little Yankel in the house?  It is not raining.”  The answer, in the long form, appears below.

The Gemara in Sukkah (28b), however, points to a contradiction from the Mishnah on the previous page. Our Mishnah states that children are actually exempt from sukkah! How, then, do we understand the derashah found in the Sifra which includes them?

The Gemara provides a resolution: The Mishnah discusses very young children that have not reached the age of instruction. The Sifra is referring to older children. The obligation, however, is still rabbinic in origin. Why then did the Torah use the word “all?” It is a Biblical device known as an asmachta, where at times the Torah will hint to a future rabbinic enactment.

So now we have some children who are obligated and some who are not. What are the parameters of “the age of instruction?” The Gemara offers two different guidelines. Rabbi Yannai defines it as whether the child is toilet trained: when he uses the facilities, does he still need his mother?

Reish Lakish says that the parameters depend upon when he wakes up at night, does he still call out for his mother? These are the parameters for when a child is exempt or obligated.

The question arises as to whether Rabbi Yannai and Reish Lakish are arguing. Rashi (Eiruvin 82b) seems to understand that they are in agreement. The Sefer Mitzvos Gedolos (SMaG), however, seems to understand that these two views are different. it seems that Rashi holds that when the child is toilet-trained, he doesn’t yell out for his mother in the middle of the night. The SMaG disagrees and holds that one is later than the other. (A quick poll of some Five Towns mothers indicates that they hold like Rashi.)

SO WHAT IS THE AGE?

So what is the age? The Shulchan Aruch rules that it is five or six years of age. However, the Gemara later points out another contradiction about the exact age. Is it four or five, or is it six? The Gemara resolves this contradiction by differentiating between when the father is in town and when he is out of town. Most Acharonim understand this to mean that it depends on how sharp the child is.

IS IT FOR EATING AND SLEEPING?

Does this mean for both eating and sleeping? The answer seems to be that it is for both.

Which now brings us to an interesting issue, a discussion of which is found in a sefer entitled HaKatan VeHilchosav (cited in BaSukkos Teishvu, p. 161). What happens in the following situation: You have room for only two beds in your sukkah–one bed for you, and one bed for your 12-year-old son. And now, a guest arrives from Israel and stays with you. Do you let your son stay in the house and allow the guest to sleep in the sukkah? Or do you ask your guest to sleep in the house and have your son sleep in the sukkah as originally planned?

CHINUCH VERSUS A GUEST’S OBLIGATIONS

However, it seems that Rav Elyashiv zt”l changed his mind. Your guest’s obligation is actually not just your guest’s obligation, but your obligation as well. There is a concept in the Torah called arvus–responsibility for one another. We took an oath at Har Sinai. We as Jews are responsible for the mitzvah observance of all of our fellow Jews. In fact, this is one of the reasons why we can make kiddush for another Jew, when we have made kiddush already. We have never completely fulfilled our obligation of kiddush when there is even one Jew out there who has not yet heard kiddush.

The responsibility of arvus is actually a Biblical one, too. Hence, Rav Elyashiv zt”l revised his position to rule that the homeowner should allow the guest to sleep in the sukkah and his son should stay in the house.

One might have taken issue with Rav Elyashiv’s revised opinion with the following argument: Just as a lulav and esrog is an expenditure and the concept of arvus does not obligate you to spend money on someone else’s obligation, so too one can view the building of a sukkah as an expenditure, and, therefore, one would not be obligated to tell a child not to fulfill the mitzvah so that the guest can.

However, to counter this argument, it can be pointed out that there is another mitzvah of chinuch here for one’s own child. We can teach our child the very important mitzvah of arvus!

The lesson is an important one in the notion of arvus, responsibility toward others. Rabbi Moshe Cordevera, in his Tomer Devorah, gives us one insight into the idea of arvus and communal responsibility. He quotes earlier authorities who write that all the neshamos of K’lal Yisrael are in reality one great soul. Each and every one of us possesses a part of that neshamah of K’lal Yisrael and, as a consequence, we are all intimately connected to one another. The verse in the Torah that says ve’ahavta lerei‘acha ka’mocha, love your neighbor as yourself, is actually quite true from a physical sense–your neighbor is part of you (see also the Yerushalmi on Nedarim 9:4).