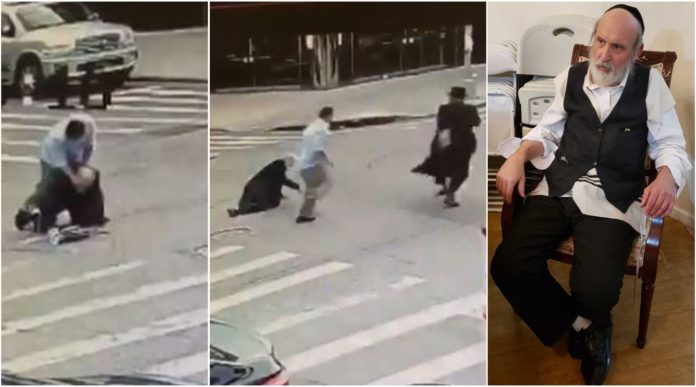 A suspect has been hit with multiple charges – without hate-motivated distinction – for viciously beating a Hasidic Jewish man in Boro Park on Sunday morning.

Farrukh Afzal, 37, of Staten Island was charged with assault, criminal mischief and harassment for the attack, which took place at around 7:30AM near 46th Street and 13th Avenue.

He was initially hit with hate charges as well, but prosecutors have decided to label this a mere “road rage” incident and NOT a hate crime. This despite the victim and witnesses saying Afzal shouted “Allah, Allah”, said he wanted to “kill all Jews” and made references to Israel throughout the attack.

Afzal, who has 8 prior arrests, was detained on Sunday night in lieu of $15,000 bail. He has since been fired from the “Church Ave Car Service” at which he was employed and whose car he was driving at the time of the assault.

As reported by YWN on Sunday, R’ Lipa Schwartz, 62, was walking to Shul, Tallis and Tefillin in hand, when a black “Church Ave Car Service” vehicle driven by Afzal came to a screeching halt at the curb nearby. Afzal got out, ran towards Schwartz and began punching him in his face while screaming “Allah, Allah” repeatedly.

“He came out from the car. I couldn’t explain to you how angry he was. He was screaming the whole time,” Schwartz told CBS2.

“All of a sudden… boof, boof, boof, boof!”, Schwartz said, referring to the barrage of punches that came his way. “So I start to fight back because it’s either death or life.”

Schwartz, a father of nine, ran towards 46th Street, but he tripped and Afzal caught up to him and once again began to beat him mercilessly.

“I fell down on the street. All of a sudden he’s on my head again, start to punch me. I screamed, ‘What you want from me?!? Help me please,’” Schwartz said.

Fortunately, a passerby approached to stop the attack, and Afzal went after him. Police said it was that distraction that likely saved Schwartz. Witnesses kept the driver at the scene until cops arrived and arrested him.

“I’m telling you if he had a knife he would stab me right on the place. No doubt,” Schwartz said.

Police later told CBS2’s Hazel Sanchez that Afzal may have mistaken Schwartz for another Hasidic man who allegedly hit his car for no apparent reason while he was stopped at a red light.

However, Afzal’s lawyer claims that it was Schwartz punched the window of his client’s car during an alleged argument that started when Afzal honked his horn, frustrated by how long it took the 62-year-old to cross the street. The lawyer claims the two men were yelling at each other, which led to the alleged hitting of the window and ultimately, the assault in the street.

On Sunday, NY State Assemblyman Dov Hikind praised the NYPD for the quick arrest. On Monday, however, Hikind slammed those trying to “mischaracterize” the attack as anything but a vicious hate crime.

“Watching the video of the incident or just hearing about it is traumatizing, especially to children and the elderly here, many of which survived the Holocaust”, Hikind said on Sunday night. Thank God this guy is off the streets. This isn’t the wild west, this is Borough Park. We won’t allow violent, hateful behavior taking place on our streets.”

Hikind on Monday: “Mr. Schwartz has been characterized in some reports as having had a prior incident with his attacker; an encounter that led to “road rage” as some described it. But this is patently untrue. Mr. Schwartz never saw his attacker before. He did not encounter him that morning prior to being attacked. Mr. Schwartz simply got up, washed, dressed, and headed for synagogue. He was a block from his home when a car screeched to a halt and someone charged at him, knocked him down and began to viciously beat him.”

Maira Riaz, Afzal’s sister-in-law, told the NY Post that Afzal is “a good guy” who “just has a case of paranoia and schizophrenia”.

“He’s been seeing things and believes he’s a prophet,” she said of Afzal. “He’s just off his meds. He has nothing against anyone and doesn’t want to kill any Jewish person.”

Schwartz’s family and many in the Boro Park community are angered at the prosecutor’s decision to drop hate charges against Afzal.

LOOK: Hasidic Judge Ruchie Freier was responsible for a #Muslim man who viciously beat a Hasidic Jewish man being released on $15,000 bail Farrukh Afzal, 37, has not been charged with a hate crime despite the fact that reports indicate he shouted "Allah", said he wanted to "kill all Jews" and made references to #Israel while beating R' Lipa Schwartz in #BoroPark on Sunday

Why do Jews vote Democratic?! When it comes to survival, they (Jews) are suicidal!”