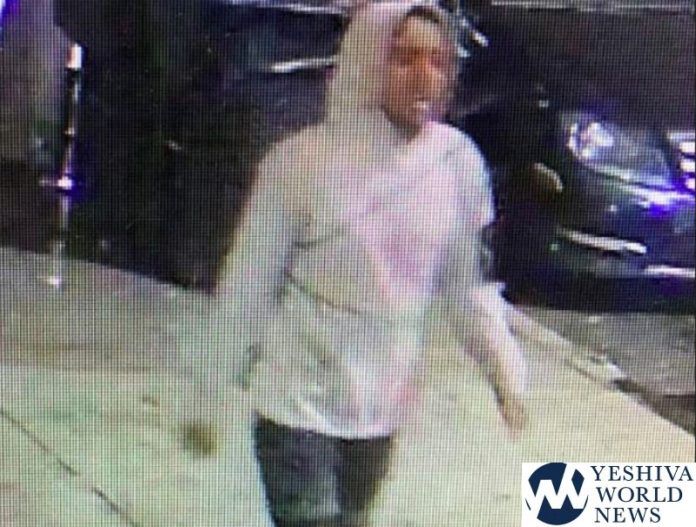 The NYPD released new footage and is asking for the public’s assistance identifying the individual seen in the attached surveillance video and photo in connection to the vicious assault of a Jewish child in Williamsburg this past Sunday.

As reported on YWN, the 9-year-old boy was walking home at around 6:00PM when a black male approached him at the corner of Throop Avenue and Walton Street. The suspect punched him several times in the face area, causing the victim pain and swelling, before fleeing the scene. Surveillance footage published by YWN appears to show the suspect pushing the victim to the ground, though that was not mentioned in the NYPD report.

The victim refused medical attention at the scene. Hate Crime Task Force is investigating the incident.

The unidentified individual is described as a male, black, light complexion, 14 to 18-years-old, approximately 5’6″ tall, medium build, weighing 150 lbs. He was last seen wearing a gray hoodie with a black patch on the sleeve, dark colored jeans and white sneakers.

Anyone with information in regard to this incident is asked to call the NYPD’s Crime Stoppers Hotline at 1-800-577-TIPS (8477) or for Spanish, 1-888-57-PISTA (74782). The public can also submit their tips by logging onto the CrimeStoppers website at WWW.NYPDCRIMESTOPPERS.COM, on Twitter @NYPDTips or by texting their tips to 274637 (CRIMES) then enter TIP577.