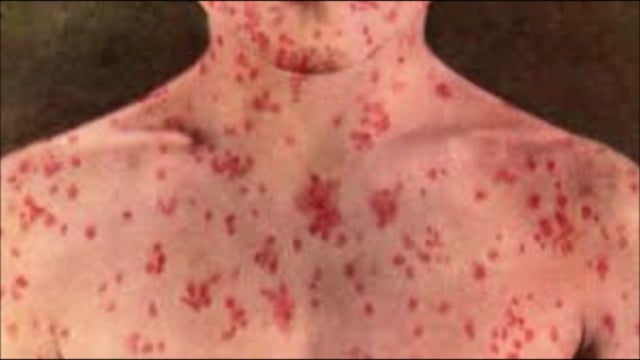 Measles cases in the United States have surpassed the highest number on record since the disease was declared ‘eliminated’ nationwide in 2000.

Overall, there have been 695 measles cases across 22 states this year, and the number continues to rise on a weekly basis. Just two days ago there were 626 cases of measles nationwide. It is the nation’s worst year for measles since 1994, with eight months still to go in 2019. There were 963 cases in 1994.

“This is alarming,” said Dr. William Schaffner, a Vanderbilt University vaccine expert. Not only is measles dangerous in itself, but its return could mean other vaccine-preventable diseases seemingly consigned to the past may be coming back as well, he said.

The NYC Health Department announced Wednesday that the number of measles cases has grown to 390, including two pregnant women diagnosed with the infection, one diagnosed in mid-April. The city reported 374 cases just two days ago.

Of the 390 cases, 323 (83%) have occurred in the Orthodox-Jewish section of Williamsburg (ZIP codes 11205, 11206, 11211, 11249), which has been under an Emergency Order to get vaccinated with the Measles-Mumps-Rubella vaccine (MMR) since April 12. There are a few isolated cases in other neighborhoods, but those have “not resulted in sustained transmission of measles,” the Health Department said.

12 individuals have received summonses for being non-compliant with the Emergency Order since the City began issuing summonses last week. Any person receiving the summons is entitled to a hearing, and if the hearing officer upholds the summons, a $1,000 penalty will be imposed. Failing to appear at the hearing or respond to the summons will result in a $2,000 fine.

Health Commissioner Dr. Oxiris Barbot said, “We have now identified two expectant mothers who have contracted measles. These cases are stark reminders of why New Yorkers must get vaccinated against the measles as soon as possible. When we do not get vaccinated, we put our friends, our relatives, our neighbors, our classmates and other fellow New Yorkers at risk. We urgently repeat our plea to every New Yorker, especially those in the affected areas – unless you have a medical condition that prohibits you from doing so, please get vaccinated.”

“Currently, the outbreak remains intensely focused in Williamsburg where vaccination rates must continue to improve. While we’ve seen a few cases in people out of the Orthodox Jewish community, all but one of these individuals were exposed in Williamsburg and Borough Park and none of these have resulted in sustained transmission, mainly due to the power of herd immunity afforded by the high vaccination rates outside of the Williamsburg epicenter of this outbreak,” said Deputy Commissioner Dr. Demetre Daskalakis. “There’s no reason why a healthy child or adult should not be vaccinated against measles. We need to make sure that everyone who can get vaccinated, who doesn’t know their immunity status or vaccination history, gets the vaccine to protect themselves and those around them that can’t.”

The number of cases is likely to go even higher. Measles is highly contagious and can spread through the air when someone coughs or sneezes. And in recent days, Jewish families have been gathering for Pesach meals. It can take 10 to 12 days for symptoms to develop.

“There’s a lot of misinformation from this anti-vaccine movement within the community. Some of the misinformation is that it causes autism, that the vaccines contain mercury, that the disease, itself will protect them from cancer, eczema,” said Dr. Joseph Kaplovitz, a pediatrician who serves the ultra-orthodox community in Brooklyn’s Williamsburg neighborhood.