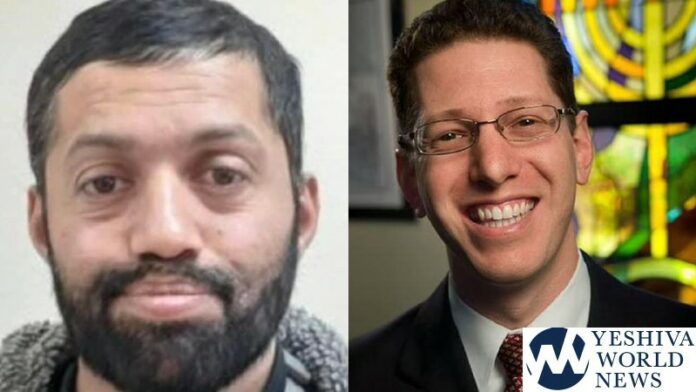 The Reform rabbi who was held hostage along with three congregants last Shabbos in Colleyville, Texas, released a statement thanking everyone who expended efforts into the safe resolution of the incident – but failed to remember the One who orchestrated his rescue.

“I am thankful and filled with appreciation for all of the vigils and prayers and love and support, all of the law enforcement and first responders who cared for us, all of the security training that helped save us,” Rabbi Charlie Cytron-Walker wrote on Facebook.

But then the Rabbi went on CBS on Monday morning. and not once in his seven minute interview mentioned G-D.

Perhaps someone needs to polish up his emunah and bitachon credentials.

Unsurprisingly, Cytron-Walker is an anti-Israel, pro-BDS rabbi who has referred to Israel as an “apartheid state.”

The hostage taker, identified as 44-year-old British national Malik Faisal Akram, was killed Saturday night after the last hostages ran out of Congregation Beth Israel around 9 p.m. The FBI said there was no early indication that anyone else was involved, but it had not provided a possible motive.

The rabbi said Monday that he threw a chair at the gunman and then escaped with two other hostages after a 10-hour standoff, crediting past security training for getting himself and his congregation out safely.

Rabbi Charlie Cytron-Walker told “CBS Mornings” that he let the gunman in Saturday because he appeared to need shelter. He said the man was not threatening or suspicious at first. Later, he heard a gun click as he was praying.

“First of all, we escaped. We weren’t released or freed,” Cohen said.

Cohen said the men worked to keep the gunman engaged. They talked to the gunman, he lectured them. At one point as the situation devolved, Cohen said the gunman told them to get on their knees. Cohen recalled rearing up in his chair and slowly moving his head and mouthing “no.” As the gunman moved to sit back down, Cohen said Cytron-Walker yelled to run.

“The exit wasn’t too far away,” Cytron-Walker said. “I told them to go. I threw a chair at the gunman, and I headed for the door. And all three of us were able to get out with even a shot being fired.”

On the synagogue website it has the following Bío of the Rabbi:

Rabbi Charlie attended Hebrew Union College-Jewish Institute of Religion at its Jerusalem and Cincinnati campuses, receiving his rabbinical ordination in 2006 and M.A. in Hebrew Letters in 2005. His rabbinical thesis was titled, “Jewish Service-Learning: Integrating Talmud Torah and Ma’asim Tovim”. As a student, he served congregations in Ishpeming, MI, Fort Walton Beach, FL, and Cincinnati, OH. During his time at HUC-JIR, he received multiple awards for his service to the community, along with an award for leadership from QESHET: A Network of LGBT Reform Rabbis.

Since Rabbi Charlie arrived at CBI he has worked to bring a sense of spirituality, compassion, and learning into the lives of our community. He loves finding a connection with people of every age and strives to carry forward the CBI tradition of welcoming all who enter into our congregation, from interfaith families to LGBT individuals and families to those seeking to find a spiritual home in Judaism, along with all others.