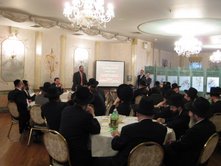 “Events like these foster an important ongoing dialogue between school administrators and the NYPD that is absolutely vital to ensuring our children’s safety,” said Felder.

An NYPD detective and one officer took questions and explained methods for heightening security such as improved lighting, locked gates, guards and detailed emergency plans. The NYPD also made itself available to conduct safety evaluations of individual yeshivas. Community members as well as representatives from Shomrim took part in the event.

Councilman Felder authored legislation introduced in 2008 that would direct the Department of Education, upon the request of a non-public school, to provide children who attend these schools with the same security services made available to children attending public schools.