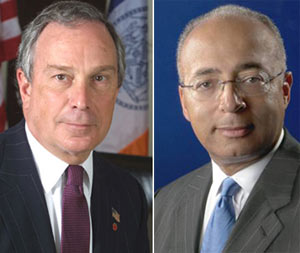 The candidates are now in place for November’s race for mayor in New York City, and early numbers show the incumbent, Mayor Michael Bloomberg, with 50% of registered voters compared with 39% for his Democratic challenger, New York City Comptroller Bill Thompson. 10% say they are unsure. In Marist’s July survey, 48% reported they backed Bloomberg, 35% supported Thompson, and 17% were unsure.

When looking at those all-important likely voters including those who are undecided yet leaning toward a candidate, Bloomberg has 52% to Thompson’s 43%.

How does the race shape up along party lines? Registered Republicans are overwhelmingly on Bloomberg’s side. 80% are backing Bloomberg compared with 17% for Thompson. Democrats, on the other hand, divide with 43% supporting Bloomberg and 46% behind Thompson. A majority of non-enrolled voters say Bloomberg is their man compared with one-third who want Thompson to take over the reins as mayor.

You can read the full Marist report by clicking HERE.