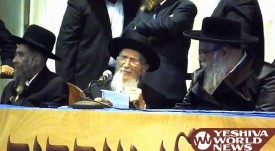 [YWN VIDEO LINK BELOW] Rabbonim Shlita were on hand on Sunday evening in the Ramat Elchanan Auditorium in Bnei Brak addressing the heads of mosdos on the threats facing the Torah community as a direct result of internet.

Over recent months, leading rabbonim have come out in an unprecedented vocal opposition, adopting an unyielding position, instructing principals to probe the homes of talmidim and those families unwilling to comply, may find themselves outside of the school walls.

The rabbonim have made progress regarding the reality that for some, internet connectivity is a matter of earning a livelihood, instruction parents to ask a rav as one would ask regarding other matters of halacha.

Those receiving a heter must understand they must have the connectivity via a filtering system, that blocks unwanted sites and only sites absolutely necessary for earning a living should be accessible.

Additionaly, one of the Gedolim speaking stated that the new rules apply for Eretz Yisroel and not for America.