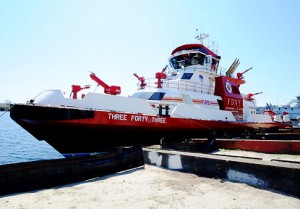 The New York City Fire Department’s new fireboat, the Three Forty Three, will arrive in New York Harbor on Friday April 30, at approximately 4 p.m. There will be a water display by other vessels in the FDNY Marine Division in the vicinity of the Verrazanno Bridge and then near the Statue of Liberty to welcome the Three Forty Three.

The new 140-foot, 500-ton, $27 million dollar boat will be the world’s largest fireboat with a maximum speed of 18 knots and the capability of pumping 50,000 gallons of water per minute. The Three Forty Three has been designed to detect and protect firefighters from chemical, biological, radiological and nuclear agents, and contains a pressurized area that filters the air supply using special charcoal and high-efficiency particulate air (HEPA) filters; allowing crew members to operate when needed in hostile environments.

Decontamination and first aid can be handled aboard the ship as well by means of a de-con shower area that leads to a triage and first-aid station.

Other innovative designs of the Three Forty Three include a forward ballast tank which lowers the boat in the water to match its deck with larger ferries that operate in the waters around New York City; a pilot house configured to allow the Captain a 360-degree view of an operation, which can assist with maneuvering the vessel in tight quarters; and a command and control area where the ship’s officers will be able to monitor and direct fire operations with the aid of remote cameras and state-of-the-art communication equipment.

The FDNY Marine Fleet is responsible for over 450 miles of coastline and harbors and has protected New York City residents for 134 years.