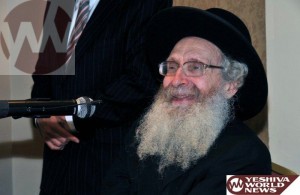 When MK (Yahadut HaTorah) Rav Yisrael Eichler got up to speak in Tuesday’s (11 Cheshvan) Knesset plenum session, he decided to use his time to share some thoughts with parliamentarians regarding the late Mir Rosh Yeshiva, HaRav HaGaon Nosson Tzvi Finkel ZT”L.

“Today, I attended a funeral of a great man, one who has 5,000 students, a Torah giant, but he fell due to the awesome burden of keeping his yeshiva afloat. Such actions, his mesirus nefesh must also compel us to introspection, a ‘chesbon nefesh’” stated Eichler.

“I am not aware of another university president in the world, most certainly not here in Israel that carried the financial burden of 5,000 students on his shoulders. Just Monday night during a shiur he was delivering in Bnei Brak the rav stated ‘I simply cannot do it anymore. For over the last five months I have not received the stipends for those engulfed in Torah learning, learning day and night, I can’t do it anymore. The next morning, he had a heart attack and went into cardiac arrest, and he was under 70-years-old”.

Eichler continued his address, explaining “He was ill, with Parkinson’s and muscular dystrophy, and his body trembled and shook in such a way it was very difficult to watch him walk. Nevertheless he never gave up; not his shiurim and not traveling distances to his students and people abroad in an effort to solicit donations for the yeshiva, Mir Yeshiva. I recall as a youth it was a very small yeshiva, perhaps 100 students, and today, there are 7,000. A large number of them, those who come to study from abroad to learn Torah remain in Israel, settling down here. Despite this, from the state’s budgetary perspective, it has reached a point that the yeshiva is no longer capable of maintaining itself.

“And today, since the financial decrees of 2003, these ‘passport students’ if you will, only received 60% of the allocated budget. When students come to Israel aligned with important projects such as Birthright, or others, traveling around the country for 10 days towards saving them from assimilation in the Diaspora, we are all in agreement that huge sums of monies must be allocated. But when students arrive to learn Torah; and they are serious and many remain and live here, and their children are born and educated here, then there is no agreement and we do not want to fund this. Take the yeshiva itself, the budget for a yeshiva student – Rav Gafne can elaborate better than I, I believe a student receives four times the allocation than a yeshiva student.

“What is going on here? A rosh yeshiva is not permitted to sit and learn and disseminate Torah, one like HaGaon HaRav Nosson Tzvi Finkel ZT”L, but he is compelled to continue trembling with Parkinson’s and travel from place to place, a schnorrer in the hope of successfully covering the yeshiva’s debt.

“We are compelled towards chesbon nefesh. He will be remembered for eternity, his outstanding merits will undoubtedly protect him and all of Am Yisrael. But for us, legislators, we are compelled to do a chesbon nefesh. Why did a rosh yeshiva of the caliber of this man have to toil just to try covering the overhead of the yeshiva because he knew the budget allocation was simply insufficient?  Nevertheless, his merits will protect all of Am Yisrael”.