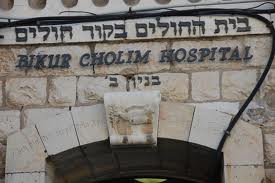 While the report from Bikur Cholim Hospital on Monday night was somewhat comforting, the Shomrei Emunim Rebbe Shlita was still connected to a respirator and listed in critical condition following cardiac arrest and a cardiac catheterization procedure.

On Tuesday morning, 8 Sivan 5772, reports signal a marked improvement, miraculous if you will. The rebbe opened his eyes in a Bikur Cholim Hospital intensive care unit and signaled his gabbai to wash his hands. It appears he was extubated and breathing spontaneously since the report states the rebbe recited birkas hatorah and was assisted in putting on tefillin.

A Kikar Shabbat report quotes Ichud Hatzalah’s Ze’ev Kakash as confirming the report based on a conversation he had with a family member of the rebbe, not first hand information.

Hospital Medical Director Dr. Pollack is quoted as saying he was in the rebbe’s room and the rebbe was shaking his hand to thank him for the treatment. Dr. Pollack calls the rebbe’s response to treatment “supernatural”, adding the handshake was not a weak one as one might expect.

13:02: Less than 24 hours after going into cardiac arrest the 88-year-old admor opened his eyes and recited brochos and with assistance, put  on tefillin. Doctors in Bikur Cholim Hospital are calling the events “a miracle”. The tzibur is urged to continue reciting tefilos for the rebbe’s total and rapid recovery.

Tefilos for the rebbe are continuing around Eretz Yisrael including at the Kosel, as well as around the world.

The tzibur is urged to be mispallel for Rav Avrohom Chaim ben Sima b’soch kol cholei am yisrael.