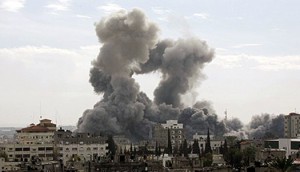 The following report was prepared and released by the Foreign Ministry of Israel.

Israel has the right under international law, and a moral obligation, to act in self-defense, to defend its population and to protect its territory when under attack, as well as to take military action against the terrorist attacks from the Gaza Strip.

The legal justification for the operation:

Hamas and other terrorist organizations in the Gaza Strip have been waging an ongoing armed conflict against Israel, which has included incessant barrages of rockets and mortars towards the Israeli civilian population and other terror activities.

Israel has the right under international law, and a moral obligation, to act in self-defense, to defend its population and to protect its territory when under attack, as well as to take military action against the terrorist attacks from the Gaza Strip.

Violations of international law on the part of the Hamas and the other terror organizations:

Hamas’ actions are in clear violation of the most fundamental principles of international law, including the principle of distinction, which requires Hamas and other terrorist organizations not only to refrain from directing its attacks at Israeli civilians, but also to clearly distinguish itself from its own civilian population.

These terrorist organizations consciously and deliberately violate these principles in a repeated manner, by deploying weapons and command centers in densely populated areas, operating from residential areas, and exploiting the civilian population by exposing them to serious harm. By doing so, Hamas and the terror organizations in the Gaza Strip are committing war crimes.

The commitment of the State of Israel and the IDF to international law:

Israel and the IDF are fully committed to international law in general, and to the Laws of Armed Conflict in particular.

The IDF receives ongoing legal advice on a wide range of operational issues at various levels of the command chain (for example, regarding targeting decisions, the use of weaponry and issues regarding humanitarian efforts towards the civilian population).

The legality of the IDF’s attacks:

The IDF makes great efforts to minimize the incidental harm that may be caused to civilians or civilian objects as a result of an attack on a military target. For example:

Munitions to be used in an attack are carefully chosen, often using precision guided missiles in pinpoint surgical strikes to minimize the risk of incidental civilian harm.

The IDF uses advanced and precise intelligence regarding target identification and employs various means for monitoring the presence of civilians in areas of operation as well as for aborting attacks if it appears that civilians are at risk.

Where circumstances permit, effective advance warning is given prior to attacks which may place the civilian population at risk.