The New York State Democratic party is meeting for two days this week at Hofstra University on Long Island to nominate candidates for governor, attorney general and other offices up for election this fall.

An excerpt from Zack Fink’s Spectrum NY1 News report on leaked internal documents reads: “There are often a number resolutions that are considered at the convention, and here is one that jumped right out. Check out the 4th one down. It says ‘Removal of Senator Simcha Felder from the Democratic Party.’ There is also a resolution urging the party to support Felder’s primary opponent. Highlighted below in red.”

NEW: leaked Democratic State Committee documents show the party will consider a resolution to kick @NYSenatorFelder OUT of the Democratic party at the convention next week. Full story coming up on @NY1 pic.twitter.com/rJh4ZPYQ5N 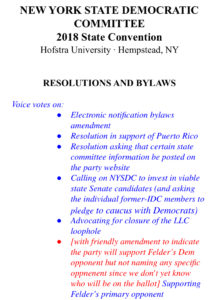 Carl Campanille at the NY Post reported, “The state Democratic Party will likely pass a resolution at its convention to support a primary against rogue Brooklyn Democratic state Sen. Simcha Felder, who caucuses with the Republicans and whose vote is the only reason the GOP controls the chamber.

The party is also expected to consider another resolution that would seek to throw Felder out of the party.

The resolutions were included in leaked documents obtained by The Post in preparation of the party convention on May 23-24. Democratic Party executive director Geoff Berman confirmed that both resolutions are on the agenda, but declined to predict how the 400 delegates would vote.”

The executive committee for the New York State Democratic Party approved the resolution for Felder’s removal on Wednesday morning, and it is awaiting a full floor vote.

“I am honored to be the most important thing on the minds of Democratic Party operatives. I am humbled by the fact that most of my constituents, who are Democrats, are more than OK with what I am doing.”

In the final moments of today’s convention, delegates approved resolutions to remove State Sen. Simcha Felder from the Democratic Party and to legalize marijuana in NY.

New York's "Democratic" Party adopted a resolution regarding my constituent, friend and our Senator, @NYSenatorFelder. Simcha is a fighter for our community and he won't be bullied. #IStandWithSimcha, and so does my community. #NYDems2018

NY State Assemblyman Dov Hikind (D-Brooklyn) says the Democrats are making a huge mistake if they go ahead and toss New York State Senator Simcha Felder from their party, as has been suggested.

“The Democratic Party doesn’t exactly represent what ALL Democrats care about these days,” said Hikind. “I hope they don’t jump off the cliff with something as knee-jerk foolish as throwing out Senator Felder. First of all, throwing out Felder would change nothing. Our community would still vote for him regardless of which ticket he ran on. Senator Felder is doing what he’s supposed to do: He’s representing his constituents, not a party. Throwing him out would simply be symbolic and it would send the wrong message. It’s idiotic and counter-productive. Let them find another scapegoat.

“What would be next, throwing out registered Democrats who vote for Republicans? Where does the party draw the line? Aren’t they ‘progressive’? Don’t they hold themselves up as the ‘inclusive’ party? What ever happened to the Big Tent?”

TOSSING @NYSenatorFelder FROM THE DEMOCRATIC PARTY? POLITICAL HYPOCRISY AT ITS WORST!

FIND ANOTHER SCAPEGOAT. WHAT HAPPENED TO THE BIG INCLUSIVE TENT?#IStandWithSimcha pic.twitter.com/9vJENpeEQG