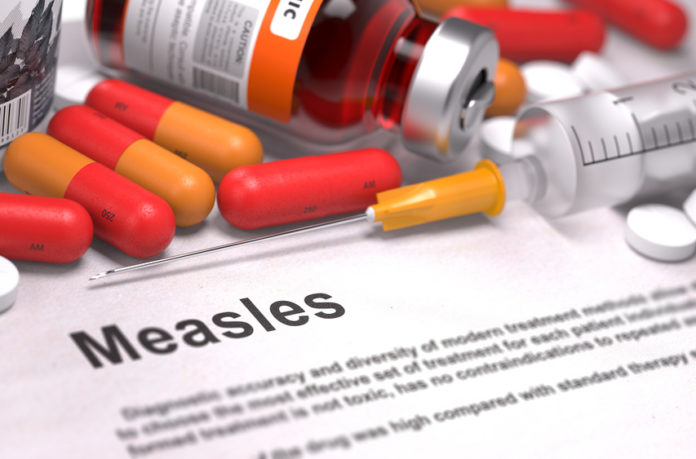 This past Tuesday, Israel’s Health Ministry announced that the outbreak of measles since the beginning of the year has risen to 882.

These case are primarily affecting the religious community. Indeed, Jerusalem District Health Officer, Dr. Chen Stein Zamir, has pointed to the low immunization rates in the capital and surrounding areas.

Why is the Chareidi community being more affected than the non-religious community?

The answer is that there is a group of people called the anti-vaxxers that are specifically targeting the religious community.

There is a Torah Mitzvah of taking safety precautions, as the verse (Dvarim 4:15) states, “V’nishmartem me’od l’nafshoseichem.” Should the view of the anti-vaxxers set aside this Torah Mitzvah? Are there other possible Mitzvos involved here as well? And, finally, are vaccinations obligatory?

Let’s keep in mind that measles is not a harmless risk-free disease. Measles can cause deafness and can be extremely painful  too– aside from the pneumonia risk, the encephalitis risk, and the possible fatal consequences. Pregnant women who get the disease are more likely to miscarry, and cancer patients with weakened immune systems are placed at grave risk.

The fact that these outbreaks occurred in religious Jewish communities is also cause for Chilul Hashem.  What follows is an historical overview, followed by a halachic analysis of the topic.

The anti-vaxxers have two concerns that are often conflated with each other.  The first is the MMR vaccine itself. They believe that there is some heretofore unidentified element in it that causes autism. The second is that some vaccines contained a preservative called “thimerosal” which contained ethylmercury – a type of mercury that has allegedly been suspected of causing autism. Thimerosal has actually been removed from the MMR vaccine with no accompanying drop in the incidence of autism. No matter. The anti-vaxxer movement has not been affected and is still moving strong.

The impetus for the growth of the anti-vaxxer movement came initially from a 1998 study published in the February 28th edition of the Lancet (pages 637-641) by Andrew Wakefield, a gastroenterologist, and 11 other colleagues. The Lancet is a highly prestigious medical journal published in England. The study supposedly linked autism in children to the MMR vaccine. The Lancet article also said that autism has origins in the gastro-intestinal systems of children.

Wakefield then made a tour of the United States in the fall of 1998, and in that tour he gave an interview at a “Defeat Autism Now” conference. In the interview, he conflated his own patients with those mentioned in his study. Wakefield had treated patients with diarrhea that did not have autism. He had conflated them with autistic patients that he never saw nor treated.

Doctors questioned how a serious study could have had such a small sample size (there were 12 subjects) to make such a revolutionary claim about vaccinations which have been around for a half century. They further questioned the uncontrolled nature and design of the study.

The main criticism expressed by many, however, was the fact that there was a serious logical fallacy at play here.

There is a Latin expression called,”Post hoc ergo propter hoc.” It essentially means that just because event Y happens after event X it doesn’t mean that Y is caused by X.   An oft-cited example of this fallacy is “the rooster crows immediately before sunrise, therefore the rooster causes the sun to rise.” Autism is not noticed at birth. It is generally first noticed shortly after the time that one normally gives the second MMR vaccine between 4 and 6 years of age.

In the March 6th, 2004 edition of the Lancet, ten of Wakefield’s twelve co-authors published a retraction of their interpretation of the data. The Lancet editors also admitted that Wakefield had failed to disclose something very crucial:  Wakefield was being funded by lawyers who were representing parents in lawsuits against the companies that produce vaccines. [They eventually lost the lawsuit, but not for lack of trying].

This information had been revealed by British journalist Brian Deer. Deer went on to win awards for his investigations, which also prompted an ethics violation query by the British government. Apparently, since 1996, two years before he had published the study, Wakefield had been receiving funding from Mr. Richard Barr of Alexander Harris Solicitors, one of the leading law firms in in Luton, Bedfordshire. Barr had been funding Wakefield through the UK Legal Aid Fund which paid bills submitted by a company owned by Wakefield’s wife. Wakefield had received the astounding sum of $750,000 (or rather its British pound equivalent) from Barr’s efforts. Another lawyer organization was funding Wakefield as well.

Almost six years later, in February of 2010, the Lancet finally retracted the original 1998 article in its entirety. This time the editors stated that Wakefield was, in fact, guilty of scientific misrepresentation. Wakefield had stated in his initial article that the sampling was consecutive, when in fact it was selective.  Wakefield was cherry-picking his results –  seriously skewing any true analysis of the data.

In the seventeen years since the publication of Wakefield’s article, dozens of legitimate studies have been conducted that show that there is no correlation between Autism and vaccinations. Thimerosal has been eliminated in this country and there is still no lowering of the incidence of autism. What has happened is that we have expanded our definition of autism and autism-like symptoms.

Historically, public policies of wide spread vaccination have saved countless lives. In the late 1790’s, Edward Janner noticed something remarkable about milkmaids. For some reason, they were immune to smallpox. Janner realized that anyone who was exposed to cowpox developed an immunity to smallpox.  In 1798, he developed and promulgated a vaccine for smallpox that saved millions of lives. The author of the Tiferes Yisroel begged and pleaded that people take the vaccine calling Janner one of the Chassidei Umos HaOlam – righteous gentiles of the world.

Smallpox has killed over 300 million people. It was eradicated completely because of vaccination programs, and the last smallpox related death was in 1978. In the early 1800’s vaccines did not have preservatives and some of them were tainted. Now the vaccines are much safer.

It is this author’s contention that vaccinations involve the fulfillment of a number of Torah Mitzvos – aside from the basic Mitzvah of v’nishmartem  mentioned at the beginning of this article.  We must also make sure that we not allow the greedy actions of others  to adversely affect our health, the health of our children, and the fulfillment of our Torah obligations.  We should also make our best efforts not to allow misinformation and fraud to change important decisions in our lives.

The verse in Parshas Ki Taytzai (Dvarim 22:2) discusses the Mitzvah of Hashavas Aveida – returning an object with the words, “Vahashaivoso lo – and you shall return it to him.”  The Gemorah in Sanhedrin (73a), however, includes within its understanding of these words the obligation of returning “his own life to him as well.”  For example, if thieves are threatening to pounce upon him, there is an obligation of “Vahashaivoso lo.”  In other words, this verse is the source for the Mitzvah of saving someone’s life –It is highly probable that it is to this general Mitzvah that the Shulchan Aruch refers to in Shulchan Aruch Orech Chaim 325. This is certainly the case with vaccinations because vaccinations save lives.

There is a negative Mitzvah of not standing idly by your brother’s blood as well – lo saamod al dam rayacha  (Vayikra 19:16).  This is mentioned in Shulchan Aruch (CM 426:1) and in the Rambam.  When people get sick and chance death because of our inaction, we are violating the posuk of “lo saamod al dam rayacha.”

The Sheiltos (Sheilta #37), based upon the Gemorah in Bava Metziah 62a, understands the words  in Vayikrah (25:36), “And your brother shall live with you – v’chai achicha imach” to indicate an obligation to save others with you.  The Netziv in his He’Emek She’ailah understands it as a full-fledged obligation according to all opinions. He writes that he must exert every effort to save his friend’s life – until it becomes Pikuach Nefesh for himself.   The Netziv’s position would certainly advocate that vaccinations are obligatory – even if there is a slight danger involved – which in modern times has been virtually eliminated.

The Ramban, Toras haAdam Shaar HaSakana (p42-43) understands the verse of “And love thy neighbor as yourself” as a directive to save our peers from medical danger as well.  We thus have a total of six Torah Mitzvos involved in vaccinating our children.

It seems that in a situation where there is concern for an epidemic, Poskim have ruled the issue of vaccination actually obligatory (See Minchas Tzvi, siman 9 and Rabbi Eliezer Yehudah Waldenberg zt”l  in Tzitz Eliezer, and Rav Yitzchok Zilberstein Shlita). How effective is the vaccine?  With two shots the efficacy rate reaches 97%.  What about the issue that there will invariably be people with allergic and or other negative reactions to vaccinations?   The language of the Shach (YD 336:1) is perhaps informative.  He writes that a doctor should not say, “What do I need this anguish for if I err and unintentionally kill a patient?”  One could perhaps extrapolate from the words of the Shach that we should do whatever we can to ensure that the population is protected through proper  vaccination.

In Taives of 5745 (winter of 1984-1985), the Steipler Gaon was asked about a case where the measles vaccine was apparently problematic.  He advised them to make sure that the next batch was problem free and instructed them to take the vaccine (Orchos Rabbeinu p. 350).

Should one violate Shabbos for a vaccination?  Rav Shlomo Zalman Auerbach (Shulchan Shlomo 329:1,2) zatzal has a fascinating definition for what constitutes safek pikuach nefesh – possible risk to life.  He writes that if from a sociological perspective people are not rushing or running to get the vaccination as soon as possible, then it is not considered enough of a danger to warrant Shabbos violation.  He writes that this is the case, even if there is an actual danger.

What about the rabbinic views that there may be substance to the anti-vaxxer view?  Carefully researching the data behind a halachic question is something that is at times daunting.  Occasionally, though rarely, the background information behind a question may not be sufficiently researched because th Gadol or Posaik relied upon someone else who did nt adequately weigh the issue or evidence.  In recent years we have seen this when Gedolei Torah reversed their ruling on the proper bracha of cashews, whether bran is considered animal food or people food too, and whether people can distinguish between pasteurized and unpasteurized wine.  Leading Gedolim who this author has consulted with in recent months, have said that when someone has done the research, and is sure that the background information behind a psak is faulty – there is an obligation to respectfully publicize the correct information.  One Gadol was Rav Chaim Kanievsky shlita, and the other was a leading Gadol in the United States.

Professor Yehiel Schlesinger, director of the Wilfe Children’s Hospital at Sha’arei Tzedek told HaAretz, “the problem in Jerusalem is with certain population regions, such as some of the Haredi areas where there are pockets of unimmunized people, and not everyone makes sure to be vaccinated.”

It is this author’s hope that the information in this article will serve to further protect us all from illness, Amain.