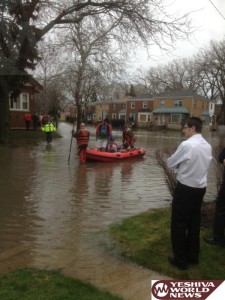 The National Weather Service has issued flash flood warnings for the entire Chicago area. Between three and nearly 7 inches of rain fell throughout the Chicago area in the last 24 hours and more was expected later in the day, according to the weather service.

Flooding shut down parts of the Kennedy, Edens and Eisenhower Expressways on Thursday morning, according to Illinois State Police.

Illinois Gov. Pat Quinn declared a state of emergency for the state and urged residents in flooded areas to stay off the roads.

“There are all kinds of things going on, lots of flooded basements, flooded streets and viaducts,” said Chicago Fire Department Chief Kevin MacGregor.

Brookfield Zoo, just west of Chicago, closed for only the third time in its 79-year history due to the weather.

ComEd, a division of Exelon, reported 21,000 Chicago-area customers without power, according to spokeswoman Krissy Posey.

The stormy weather was also affecting other parts of the country, including West, Texas, where emergency workers were responding to a fiery, fatal explosion at a fertilizer plant. AccuWeather reported that heavy rain was sweeping into the area, with wind gusts of up to 45 miles per hour.

A moderate risk of severe thunderstorms was predicted into the evening on Thursday for parts of Mississippi, Arkansas, Tennessee, Kentucky, Illinois and Indiana, according to the NWS Storm Prediction Center.

A spokesman for Metra, the Chicago commuter rail service, said three Union Pacific Lines suffered severe delays due to a loss of power at a “complex set of switches” outside a major downtown train station after a lightning strike.

Power has been restored, but trains were getting through at “much slower rates than normal,” spokesman Tom Miller said. “We’re playing catch-up.”

Passengers on their morning commute waited for up to two hours on trains backed up outside Ogilvie Transportation Center in the pouring rain, many of them within sight of their downtown offices.

On the city’s South Side, a sinkhole opened up on a residential street, swallowing three cars, according to Officer Mike Sullivan of the Chicago Police Department. One person was hospitalized with non-life-threatening injuries.

Officials in the Chicago western suburbs of Lombard, Schiller Park and Elmhurst and the county of Lake have declared states of emergency due to the flooding and urged residents to stay off the roads.

“Our experts at the Illinois Department of Natural Resources are very concerned about the next few days, that certain rivers in our state are at record levels with respect to flooding that we’ve never seen before,” Quinn said in a news conference. High water is reported on the Fox and Des Plaines Rivers.

A multi-car accident on I-294 in Cook County resulted in the deaths of two people early Thursday morning, according to Illinois State Police. It was not immediately known if the accident, which involved a truck tractor semi-trailer and five cars, was weather-related but it had been raining heavily at the time.

National Weather Service meteorologist Amy Seeley said the amount of rain was “unusual” for the Chicago area, even for usually rainy April.

The Fox River is expected to reach 15.5 feet above flood level Thursday in the town of Montgomery, Illinois, 55 miles from Chicago, beating the record of 15.12 feet in 2008, Seeley said.

The Des Plaines River at Russell Road in Lake County, north of Chicago, is expected to reach 10.5 feet, near the record of 11.09 in 2004, Seeley said.

The weather was clearing up for Thursday afternoon — with light rains predicted the rest of the day and on Friday, Seeley said.