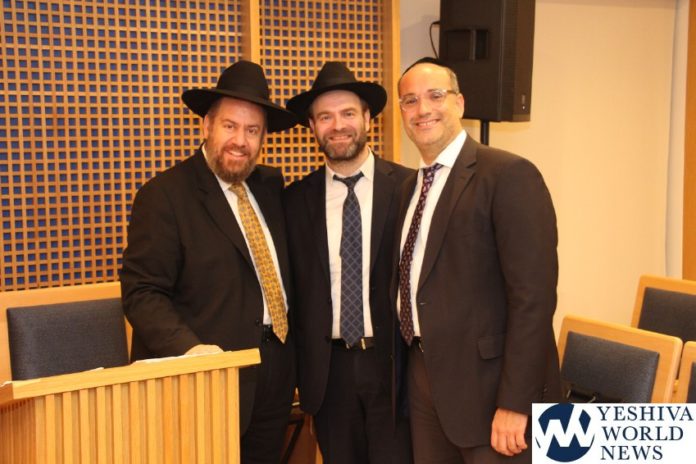 And then there were five.

This past Wednesday night’s Global Daf Yomi Siyum on Maseches Bechoros took on extra intensity as the celebration of yet another successfully completed portion of Shas served as a concrete reminder that a mere handful of masechtas remain in the 13th Daf Yomi cycle.

Presented by Agudas Yisroel’s Daf Yomi Commission, the siyum took place at Congregation Magen David in Surfside, Florida, with a full house turning out to mark the occasion and thousands more tuning in worldwide via livestream and teleconference.

The night’s events began with a video interview featuring Agudath Israel of Florida’s executive director Rabbi Moshe Matz and attorney Rick Moore who, for many years, lived his life without a full appreciation of the value of limud haTorah. As Mr. Moore began to slowly develop an appreciation for daily Torah learning, he made a commitment following the last Siyum HaShas to begin learning Daf Yomi. Mr. Moore now attends multiple daily Gemara shiurim and described Daf Yomi as a life changing experience, one that has imbued him with a greater sense of self-respect and has sparked a desire to delve deeper into the waters of Torah.

Magen David’s mara d’asra, Rabbi Gabriel Koskas, made the siyum on Maseches Bechoros and spoke passionately about the 2012 Siyum HaShas, noting that while some were inspired by the silence that fell across MetLife Stadium during davening and others were moved by the awe inspiring Shema Yisroel, it was a conversation later in the night with a New York taxi driver that is forever etched in his memory. The cabbie was stunned to hear that tens of thousands of people had come together, not to take part in a heated sports competition but instead to join together to celebrate a monumental act of scholarship involving only one team, his off the charts astonishment prompting Rabbi Koskas to launch Magen David’s Daf Yomi chabura, which included Mr. Moore among its members. Rabbi Koskas emphasized that the unique achdus that characterizes the Daf Yomi program, with Jews in cities across the globe, learning the identical words of Gemara every single day, could only be described as “kadosh, kadosh, kadosh.”

Rabbi Eliyahu Simcha Bamberger, national director of the Daf Yomi Commission spoke briefly, introducing the evening’s featured speaker, Rabbi Ephraim Shapiro, mara d’asra of North Miami Beach’s Congregation Shaaray Tefilah. Electrifying the room, Rabbi Shapiro observed that with its rigorous daily commitment, the study of Daf Yomi plays an integral role in our lives, creating a standard of consistency that unites Klal Yisroel and ultimately brings the Shechina in our midst. Rabbi Shapiro noted that Daf Yomi also serves as a model of a Torah lifestyle, setting an example for our children to emulate as they see for themselves that learning is an integral component of our daily lives.

“Limud HaTorah is in our DNA, day in and day out,” explained Rabbi Shapiro who also extended his personal brachos that The Siyum, taking place on January 1st, 2020 at MetLife Stadium in East Rutherford, New Jersey, bring about a tremendous Kiddush Hashem b’rabim.

Rabbi Bamberger categorized the Surfside siyum as a truly dynamic event, one whose joy over the completion of the masechta was further enhanced by the excitement of the upcoming Siyum HaShas.

“The message is very clear and stronger than ever,” explained Rabbi Bamberger. “Limud HaTorah is the glue that holds Klal Yisroel together and Daf Yomi is one of the best and most powerful ways to do that in a consistent manner. It gives people an opportunity to finish Shas, people who never would have dreamed of even coming close. Daf HaYomi is certainly unique in the way it serves as a uniting force bringing together so many different types of Yidden all under the banner of Limud HaTorah.”