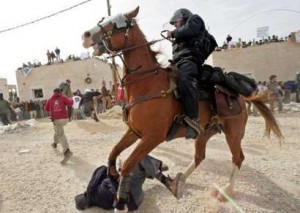 For the residents of the Shomron community of Amona, their preparations for the Tishrei Yomim Tovim are accompanied by fears of a court-ordered expulsion from their homes.

Amona’s headaches began when ten residents of Silwad enlisted the support of the Yesh Din organization to petition the Israeli judicial system towards having the community destroyed, claiming it was built on privately Arab-owned land. The High Court of Justice accepted the position of the Silwad residents and ordered the homes destroyed. In the interim, residents of Amona purchased most of the plots in question, with the exception of one caravan home and the approach road to the community. Regarding the remaining caravan, it was moved from the controversial area and the entrance road was destroyed.

The state then informed the Supreme Court that the status of Amona has changed and there was no longer a question of Jewish homes on private Arab land.

However, Yesh Din was determined to have Amona destroyed and the petition was amended to include land belonging to Arabs who to date have not turned to the court. The court stated that if testimony from the others can be documented, the homes would still be destroyed.

While the state presented the court with evidence that the legal issues mentioned in the original petition were corrected, and despite all the efforts, expense and effort to find a solution, Amona residents feel the amended petition places them at even greater risk for expulsion by the court. Amona residents realize that once the court accepted the amended petition it would likely spell trouble for them in the near future.