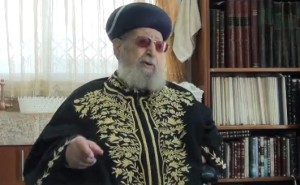 UPDATE 20:00:
A name has been added to Maran HaGaon HaRav Ovadia Yosef Shlita due to the seriousness of his condition. The ceremony to add the name was conducted by Maran’s son, Rishon L’Tzion Rabbi Yitzchak Yosef.

UPDATE 19:37:
Ichud Hatzalah reports that Maran HaGaon HaRav Ovadia Yosef’s children are present at his bedside at this time.

A gabbai of HaGaon HaRav Aaron Yehuda Leib Shteinman Shlita tells Kol Chai Radio that the gadol hador received the news during a shiur and halted the shiur, instructing Am Yisrael to stop and recite Tehillim wherever people are, at home or the beis medrash. “Rav Shteinman is monitoring Rav Ovadia’s condition with great concern” explains Rabbi Yaakov Rosenstein

Eli Yishai spoke with the Kol Chai open line on behalf of the gadol hador. He too is at the hospital with the rav’s children and those closest to him. Yishai made an appeal to “cry to the Heavens that Maran will recover for we cannot continue without him”.

UPDATE 19:30:
Rishon L’Tzion Rabbi Shlomo Moshe Amar spoke with Kol Chai, explaining he was with the gadol hador on Monday, spending a lot of time with him. “One who does not see the pain, to see a Sefer Torah in agony cannot understand. We are in need of the rav, one who built the generation. Everyone must daven with all their abilities on his behalf.”

Rav Amar recited a number of chapters of Tehillim, stressing the importance of Perek 6 for a recovery. The rav also recited the tefilla of the Rashash.

Rav Amar was at the rav’s bedside about a half hour earlier and confirms this is a time of tefilos of the tzibur at large as he and others did in Shaare Zedek Medical Center.

UPDATE 19:24:
Chief Rabbi David Lau tells Kol Chai Radio that despite the difficult news we must remain joyous as we are commanded during the Yomtov. The chief rabbi tells of how Maran HaGaon HaRav Ovadia Yosef Shlita phoned him before Rosh Hashanah and they had opportunity to speak.

Rav Lau calls on the tzibur to be mispallel and do acts of chessed for “the generation is in need of this unique personality, a Torah giant”.

It is being stressed that despite reports to the contrary earlier, the rav’s major organs are not failing and the decision to place him into a medically induced coma and on a mechanical respirator was made to permit the elderly rav’s body to rest, and NOT due to system failure B”H.

An atzeres tefilla will take place at Kever Rochel at 21:00 on behalf of the Gadol Hador.

The tzibur is urged not to come to the hospital but to put the time to better use by reciting Tehillim on Rav Ovadia’s behalf.

UPDATE 19:05: Shas leader Aryeh Deri, in a conversation with Kol Chai Radio spoke as the tears flowed, begging Am yisrael to be mispallel on the rav’s behalf.

“The doctors realized that he appeared stable but the signs told a different story and the decision was made to place the gadol hador into a medically induced coma and connect him to a respirator. After the dialysis today, and the realization he is schedule to undergo dialysis on Tuesday, they feel his weakened body must rest and the coma and respirator arrangement is the best recipe for this considering the elderly gadol’s frail condition. It is difficult to explain just how frail his physical being is. He was aware that they decision regarding the medication and the respirator. Please be mispallel. I cannot view a world without Maran. We need him!”

UPDATE 19:04: Doctors in Hadassah Hospital report an accumulation of fluid in the gadol hador’s lungs prompted the decision to place him on the respirator. It is clear that the rav’s major organs are failing and he is in need of Rachmei Shomayim following the insertion of a pacemaker and kidney failure in the past 24 hours.

Tefilos are taking place around Eretz Yisrael and the world for the gadol hador’s recovery.

Reports from Hadassah Ein Kerem Hospital late Sunday night, the eve of 19 Tishrei 5774 close to midnight pointed to a deterioration in the condition of Maran HaGaon HaRav Ovadia Yosef Shlita.

Earlier in the night a pacemaker was inserted into the rav and it was reported that the procedure went well. However, a number of hours later the gadol hador’s condition deteriorated and there are continued calls for tefilos. Kol Berama Radio in conjunction with Kikar Shabbat set up a tefilla hotline number, 1-800-888-444.

10:36 IL: Rav Ovadia is undergoing dialysis in Hadassah, a move the doctors’ hope will assist in improving his diminished kidney output.

11:45: A Kosel tefilla rally will take place on behalf of the gadol hador, who officials report remain alert and oriented. The Kosel event begins at 17:00 Monday, 19 Tishrei 5774.

14:13: In a phone interview with Kol Berama Radio, Shas leader Aryeh Deri reports Maran HaGaon HaRav Ovadia Yosef Shlita had “a very difficult night” and therefore, the decision was made to go with dialysis. Deri explains the doctors hope the dialysis will jumpstart the gadol hador’s kidneys, which are not functioning at an acceptable capacity.

Deri reports that Baruch Hashem the dialysis went well and the rav is more comfortable. He has been conscious and alert since being admitted again on motzei Shabbos. Deri adds the rav is responding to questions from doctors and was yotzei the mitzvah of arba minim.

The Shas leader added when he told Rav Ovadia the tzibur is being mispallel for him, he stated with teary eyes “Ashreichem Yisrael. You love me so much please have mercy and continue to be mispallel for me.”