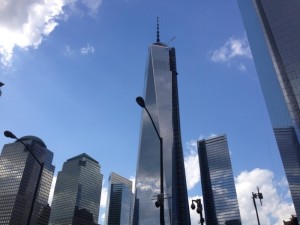 One World Trade Center will be the nation’s tallest building when it is completed next year, a Chicago-based tall buildings council announced Tuesday.

Reflecting intense public interest in the decision, the announcement was made before a bank of television cameras in a packed room of the 16th floor of the IIT Tower at the corner of State Street and 35th Street. The room looked out to the Chicago skyline, including Willis Tower.

Widely acknowledged as the arbiter of skyscraper height disputes, the private, Chicago-based Council on Tall Buildings and Urban Habitat announced its decision in simultaneous Chicago and New York press conferences.

The announcement culminated weeks of speculation about the ruling, which drew widespread attention because it would finally settle the issue of whether Chicago or New York could claim bragging rights to having the nation’s and the Western Hemisphere’s tallest building, as well as whether One World Trade Center would achieve the symbolic height of 1,776 feet.

Willis Tower, completed in 1974 and once the world’s tallest building, is 1,451 feet tall. Dubai’s Burj Khalifa, the current holder of the title, is 2,717 feet tall.

The council’s height committee met for 3 1/2 hours last Friday at the Illinois Institute of Technology, where the council is headquartered. Representatives of the Port Authority of New York and New Jersey, a co-developer of One World Trade Center, addressed the committee, as did the skyscraper’s architects, the New York office of Skidmore, Owings & Merrill.