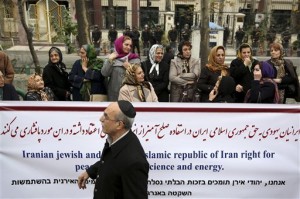 Hundreds of Iranians including university students and members of the country’s Jewish community rallied Tuesday in support of the Islamic Republic’s disputed nuclear program on the eve of the resumption of talks with world powers.

Iranian state TV showed students gathered at the gate of Fordo enrichment facility, carved into a mountain south of Tehran. They formed a human chain, chanted “Fordo is in our hearts” and denounced the West, which has put pressure on Iran to curb enrichment activity which can be a step toward weapons development.

In Tehran, meanwhile, several dozen people identifying themselves as Iranian Jews gathered outside a U.N. building. It was a rare public display by the community, which tends to keep a low profile despite being the largest in the region outside Israel and Turkey.

Iran’s nuclear program is popular, including among critics of the clerically dominated system, but any major gatherings or demonstrations would need official approval.

Iran has long refused to completely give up uranium enrichment, but the level of enrichment has become a key aspect of ongoing Geneva talks schedule to resume later this week. Halting 20 percent enrichment – a level Iran has acknowledged and which is several steps away from weapons-grade material – is a central goal of the West.

Iran is concerned about a possible Israeli strike against Fordo or similar facilities. Israel has repeatedly criticized a potential deal between Iran and the world powers, saying it will allow Iran to continue suspect activities. It has also not ruled out military option against Iran’s nuclear facilities.

The West suspects Iran’s nuclear program has a military dimension. Iran says the program is for peaceful purposes like power generation and cancer treatment.