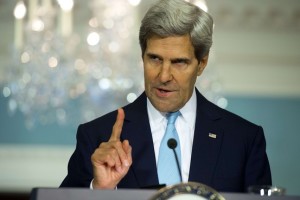 In a Jerusalem address to an audience of about 100 participants, Defense Minister Moshe Ya’alon on Thursday, the eve of 16 Shevat stated that the United States does not understand the situation pertaining to the future security of the Jordan Valley.

Just days after his blistering criticism of Kerry, who the defense minister called “messianic and obsessive”, and the subsequent apology, Ya’alon told his audience that the US simply doesn’t get it. This time he avoided a personal attack against Kerry. Ya’alon, a retired IDF chief of staff explained again that sensors and pilotless aircraft are not capable of replacing soldiers on the ground for at best. Ya’alon stressed that Israel will never place her security in the hands of a third party and that is exactly what the Americans are asking Jerusalem to do.

The minister explained that as defense minister he favors introducing high-tech detection apparatus in addition to ground forces, but not as a replacement.

The senior minister feels America misses the point for it has focused its peace-making efforts on the PA (Palestinian Authority) when in actuality; this is not the crux of the problem. “America’s mistaken approach advanced the Islamic Brotherhood agenda in Egypt even though they did not win the elections. Then when the coup began the Americans did not assist the military there when it should have” Ya’alon explained.