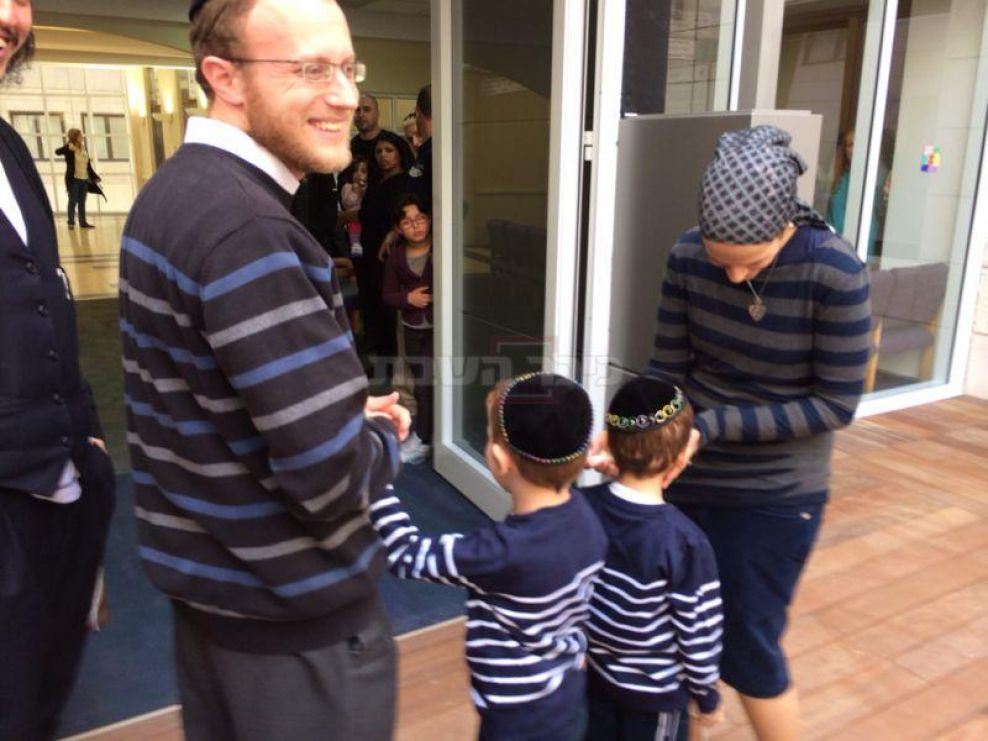 The young boys arrived in critical condition connected to cardiac bypass machines after their bodies were poisoned by a toxic pesticide used in their home. Doctors were not optimistic, explaining their cardiac muscle and lungs sustained near irreparable damage. There were also grave concerns for their neurologic state if they recover.

B’chasdei Hashem their parents R’ Shimie and his wife Michal were on hand to take their sons home after the tragic ordeal that led to the deaths of their daughters Yael and Avigail z”l, 4 and 8-years-old. The boys were discharged on 17 Adar I 5774.

Shimie told reporters B”H we are returning home with two healthy boys, שהחיינו וקיימנו והגיענו לזמן הזה. He thanked all the personnel at the hospital, as well as Am Yisrael for the countless tefilos on behalf of his children.

Chief of Critical Care Medicine at Schneider Dr. Ovdei Dagan added “When they arrived here we did not know that we would be standing here today. They are being released in good condition. Neurologically speaking they are good. There are no signs of long-term damage. We must remember that along with our joy is their loss, their two daughters.”

“Their cardiac output is sound and their EKGs continue to improve. Their hearts should return to normal”, added Dr. Einat Berk. Berk added that when they became aware of what happened to the girls and that the lives of the boys rested in their care it became a very emotional ordeal for the team.

The tragedy that hit the Gross family occurred on January 22, 2014. Since that time they have been engulfed in tefilos and the battle surrounding efforts to save their sons.

Police this week announced the exterminator hired to fumigate their home in the Givat Mordechai area of the capital, Yossi Barkan, will most likely face a criminal indictment including charges of negligent homicide in the deaths of the little girls.