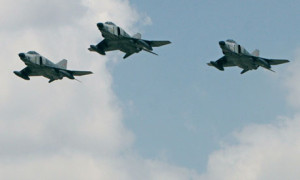 Turkish fighter jets shot down a Syrian warplane Sunday after it violated the country’s airspace, Turkey’s prime minister said, in a move likely to ramp up tensions between two countries already deeply at odds over Syria’s civil war.

A spokesman for Syria’s military confirmed the incident, denouncing it as a “blatant aggression.” The unnamed spokesman quoted on Syrian state TV said the plane was hit while pursuing gunmen near the border, and that the pilot safely ejected from the aircraft.

Turkey, once an ally of Syria, has emerged as one of the strongest critics of Syrian President Bashar Assad and is now one of the main backers of the 3-year-old rebellion against him. Hostilities have flared along the border on several occasions, although the exchanges of fire have generally been brief and very limited in scope.

Despite the protestations from Syria, there was little indication either side wanted the confrontation to escalate.

In a statement, the Turkish military said a Syrian MiG-23 entered Turkey’s airspace near the Hatay border zone after ignoring four warnings to turn back. One of two Turkish F-16s flying an air patrol in the area then fired a missile that struck the Syrian jet, which crashed 1,200 meters (yards) inside Syrian territory near the town of Kassab, the military said.

Turkish Prime Minister Recep Tayyip Erdogan, speaking at a rally in northwestern Turkey a week ahead of local elections, congratulated the Turkish military.

“If you violate our border, our slap will be hard,” he said.

The Lebanon-based Al-Mayadeen TV, which has a network of reporters around Syria, reported that the pilot of the downed warplane landed in the village of Bahlawaniya in Latakia province. It gave no further details.

Syrian rebels launched an offensive in the Kassab area of Latakia near the Turkish border on Friday. The rugged hills near the frontier have been engulfed in heavy fighting since then.

On Sunday, activists and state media reported clashes near the town, and said both sides were dispatching reinforcements. Syrian officials said the opposition fighters were coming from inside Turkey.

The Britain-based Syrian Observatory for Human Rights reported clashes between troops and rebels led by fighters from the al-Qaida-linked Nusra Front near Kassab and a strategic hill known as “Observatory 45.” It added that some of the shells fired by Syrian troops fell on the Turkish side of the border.

Syria’s Foreign Ministry said Sunday that the Turkish government has launched over the past two days an “unprecedented and absolutely unjustified military aggression against the sovereignty of the Syrian territories in the Kassab.”

It said that “this aggression aimed to cover the entry of armed groups into Syria and was part of the aggressive policies of the government of Recept Tayyip Erdogan.”

This is not the first time that the Turkish military has downed a Syrian aircraft near the border.

In September, a Turkish fighter jet shot down a Syrian military helicopter after it entered Turkish airspace. The helicopter strayed 2 kilometers (more than 1 mile) into Turkish airspace, but crashed inside Syria after being hit by missiles fired from the jet, Turkish officials said at the time.

Turkey changed its rules of engagement in 2012 after Syria shot down a Turkish military plane, declaring that any Syrian military element approaching the Turkish border would be treated as a legitimate target.