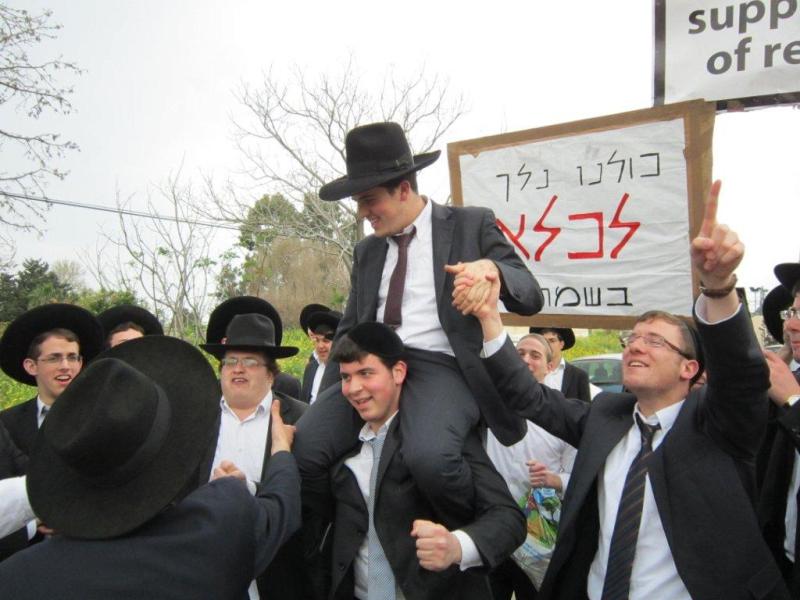 Yeshiva bochur Yaakov Yisrael Paz, who was arrested for not reporting to an induction center, was released on Tuesday morning after serving 10 days in IDF Prison 6. Dozens of well wishers were on hand to meet him when he left prison, treating him as a hero. Paz will be taken to the home of HaGaon HaRav Shmuel Auerbach Shlita to make a l’chaim after adhering to the instructions of his rav.

Speaking with Galei Tzahal (Army Radio) Paz explained that “sitting in jail for HKBH and the continuation of the chain from Avraham Avinu and the Torah HaKadosha is nothing less than a Kiddush Hashem”.

Paz explained “I am a talmid of Maran Rav Auerbach and I will continue to adhere to his words”.

Is there a machlokes between Rabbi Auerbach and rabbis in Bnei Brak?

I am 18. Who am I to even begin to question machlokes between gedolei yisrael? I have my rav and my job is to adhere to his words.

How was the day-to-day experience in jail?

Actually, it was great for it was totally a Kiddush Hashem and with this constant awareness, it is fine.

Enough with the slogans! How was it to spend time in an IDF jail?

You don’t get it! It isn’t slogans but my belief, our belief. We were 22 in my room and I earned the respect of all. They admired me for sticking with my beliefs. Actually the jail time was uplifting and inspiring. We davened every day and we had a minyan too.

You just do not understand, you will not break us. We are stronger than you and them. We have rabbonim and Torah on our side. We will not serve. We will not fold and we will continue adhering to the words of our gedolim, not the IDF.