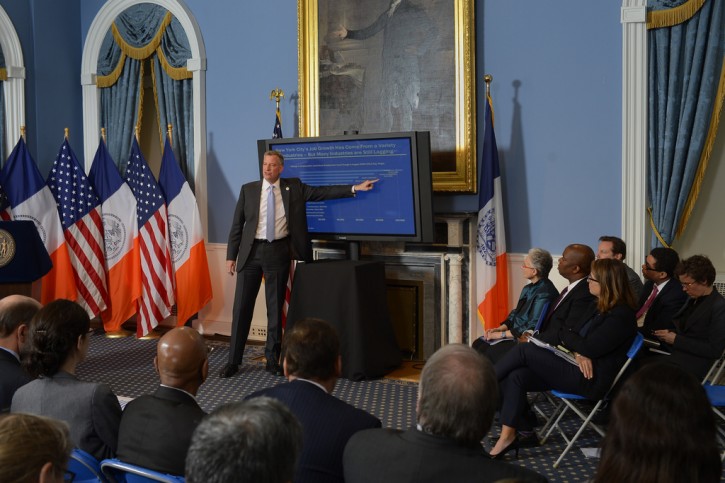 De Blasio devoted much of his financial resources to create a budget – which now will be subject to negotiations with the City Council and must be approved by July 1 – that backs up the campaign promises that ushered him into office in January, when he became the city’s first Democratic mayor in a generation.

His signature campaign pledge was to fund universal prekindergarten and expanded after-school programs for middle-schoolers with a tax hike on the city’s wealthy. When that idea died in Albany, the state government stepped in with $300 million for pre-K but little for the after-school programs, prompting the mayor to proposing spending $145 million in the next fiscal year to expand programs for nearly 100,000 children.

Reflecting the city’s improving fiscal outlook, the budget is full of new expenditures with little in the way of new savings. Other areas where de Blasio is increasing spending also dovetail with his goal of fighting income inequality by helping those who felt left behind by 12 years of what they viewed as ex-Mayor Michael Bloomberg’s business-centric policies. De Blasio is adding $70 million to city housing authority’s repair budget and increasing services for the homeless, whose numbers expanded under Bloomberg.

The new budget also contains spending increases for infrastructure and road repair, in the wake of a brutal winter that wreaked havoc on the city’s roadways. The mayor also wants to spend more money on a series of steps, from speed cameras to speed bumps, aimed at reducing the number of pedestrian deaths in the city.

De Blasio also plans to ease some fines for small business, another campaign promise of his, which will mean an 8 percent drop in that source of revenue, from $859 million to $789 million.

Looming over the city’s fiscal picture are the expired contracts of more than 150 city unions. But de Blasio believes that the $5.5 billion agreement with teachers reached last week sets a pattern for negotiations with other unions that the city can afford, particularly if the $3.4 billion expected savings on health care can be reached.

But de Blasio warned that the city’s fiscal outlook still faces some challenges. His team projects that New York will face a $2 billion structural deficit for the fiscal year that begins in July 2015.

To this point, the budget process this year has been far less rancorous than the battles that dominated the final budgets of the Bloomberg era. Those negotiations with marked with by the so-called “budget dance” in which Bloomberg, a Republican-turned-independent, would propose cutting services such as firehouses and libraries and then the Democratic-controlled council would restore them. The council now is closely allied with de Blasio.