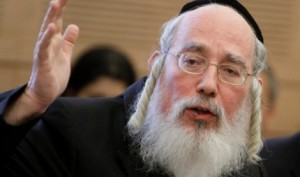 Addressing the Knesset on Yom Yerushalayim, MK (Yahadut Hatorah) Rav Yisrael Eichler mentioned how there is much concern over the outcome of the European Union Parliament elections, which has given a significant boost to extremist right-wing parties that promote anti-Semitism.

Eichler then quotes Finance Minister (Yesh Atid) Yair Lapid, who this week stated that he and his colleagues are now in charge and the chareidim ‘will accept our values” as well as warning if chareidim do not stop seeking to impose their mehadrin bus segregation on those who are uninterested, ‘there will not be buses for the chareidim’.

Eichler recommends that when participants in Yom Yerushalayim are out in the streets celebrating to remember the very same Lapid is willing to expel 80,000-90,000 settlers from their homes in Yehuda and Shomron, quoting a statement on the matter made by Lapid. He quotes Lapid saying “the government must take the painful road [and oust the settlers] and not the pleasant easy path.

“My colleagues, there is a danger when Bashar el-Assad speaks this way as well as when the racists in Europe mimic these ideals and as well as those in Knesset….”