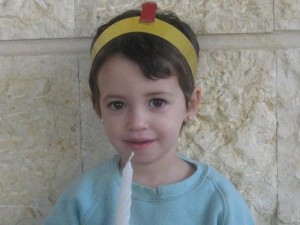 About a year and a half after the collision that changed the life of the Biton family, Mrs. Adva Biton gave birth to a healthy boy Baruch Hashem. Last month YWN-ISRAEL reported that Adele Biton was returning home following extended therapy.

Adele was a toddler when the family car rammed into the rear of a parked truck in Shomron. The accident, which occurred in the Shomron, was the result of the vehicle being bombarded with stones hurled by Arabs. Mrs. Biton lost control and hit the truck, leaving Adele with serious head injuries.

Speaking to reporters after giving birth last week, Mrs. Biton said “We wish to thank HKBH for his chessed,” adding the baby is a healthy boy.

Adele is 4-years-old today and she has limited abilities as a result of the neurological damage that she sustained due to the head injury. Her family lives in a rented home because the family home is still not ready to accommodate her special needs, this the result of bureaucratic foot-dragging the family explains.